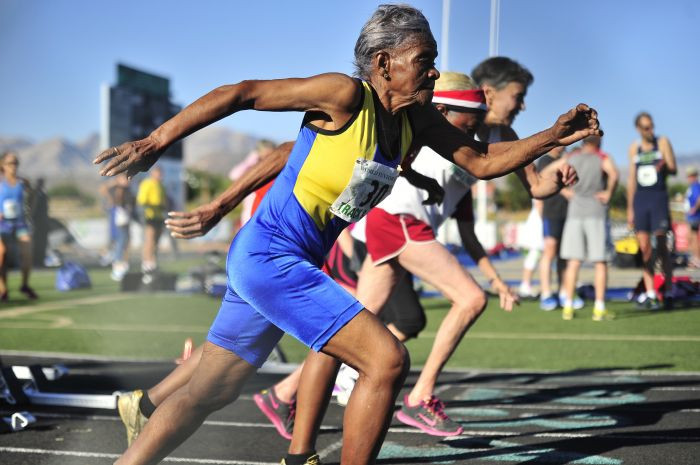 The late Jon Huntsman had a vision that a multi-week, multi-sports event called the World Senior Games, even if held in a remote corner of Southern Utah, would draw thousands of what some might describe as the elderly to recreate and compete with their peers.

So senior athletes, ages 50 to 100, have responded annually by the thousands to St, George, no longer a remote section of Utah but rather a city that has, for the past two decades, been one of the fastest-growing cities in the nation. And that’s what Jon Huntsman, who died in February of 2018 at 80, had in mind.

The Huntsman family continues to open the Games personally, with a warm welcome to the athletes and the lighting of the torch in traditional Olympic fashion during the Opening Ceremonies. This year the family member was granddaughter /Ruby Earl.

So it is that the Games turned 35 this year, with 11,000 seniors from 33 countries competing over the past two weeks in everything from badminton, pickleball, volleyball, and softball to individual competition, as in track & field.

When I first learned of the games in 2002, I was pleased to learn that they weren’t really “world games’’ in the sense you didn’t have to be world-class to compete. That meant some competitors are world-class while others, like me, didn’t have to be, though I had won the 100 and 200-meter events at the Washington State Senior Games in 2000 and 2001. 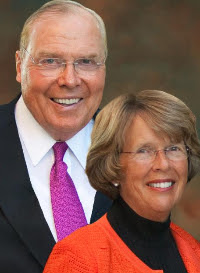 Jon & Karen Huntsman, had a vision that the World Senior Games would attract thousands of seniorsI figured I wanted to compete in something called the World Senior Games, an ego trip some might suggest, so I traveled to St. George in ’02 and took sixth in the 100, which had 24 competitors, and was somewhere back in the pack for the 200.
The 100 meters that year was evidence of the mix of those drawn to seniors' competition.

The winner was a guy named Gary Sims, formerly a pharmacist in Southern California, who had never run competitively until he was 50. He won in St. George half a dozen times and held the meet record for the 100 and 200.

The second-place finisher in both events was John Ross, a professor at the University of Edinburgh. He was a European champion in the 100 and 200 and regularly made it to St, George.

They were well in the distance, and I saw the backs of their shirts as we headed down the track.

I didn’t run in the Games again until 2011 when successful colon cancer surgery while various friends were battling the disease, or had lost, made recovering from the required weeks of rest and getting in shape and running the most important goal I could imagine.

The fact that it was the 25th year of the Games was an additional lure, and I was pleased to tell friends I finished third and thus have a medal from the anniversary event.

I also made sure to compete in the 30th-anniversary games in 2006, and the fact there were no Games in 2020 made it essential to be in St. George for the 35th this year.

Seeing the backs of the runners ahead of me is part of the memory of each event, though I managed to take second place in 2015. And so it was last week when I shook hands with three runners who regularly set a pace a couple of seconds faster than my now 19 seconds. Four of them finished ahead of me this year.

Kyle M. Case, 48, has been the CEO of the Games for 15 years, and they have become a family affair for him and his commitment to the thousands of seniors who gather in St. George from many nations.

“I have been blessed to award both my parents at the Huntsman World Senior Games, including several golds,” he said of his mom, who runs the 5,000 meters, and his father, who pitches horseshoes.

“They have really caught the spirit of active aging and what the games are all about, and I’ve been proud as I could be to watch their athletic success unfold.”

“And this year I had the opportunity to hang a bronze medal on my wife in her first year of eligibility for her performance in the 50-meter track event,” he said proudly of his wife of 27 years, Mindy Hyde Case. “We have two amazing kids, McKinley Wood, 26, and Christian Case, 23.”

For CEO Kyle M. Case, the Huntsman World Senior Games he has guided for 15 years have become a family affairIn addition to individual events like track & field, golf and tennis, there are many team sports like volleyball, basketball, and softball, and the competitiveness is no less on display in those events.

But as the teams acquire a group focus and commitment in competition, they sometimes bring that group commitment into their everyday lives back home, as with the Colorado Wildfire Senior Women’s Softball Club of Denver.

I learned of the Wildfire softballers in a chance meeting at the Hilton Garden Inn, where many teams and individuals were staying because it's adjacent to the Game headquarters at the Dixie Center.

I had a problem with my laptop (I have to do my column and emails even if on personal travel) in the lobby and asked if anyone had computer savvy.

So Melissa Beverly, an executive with an Indiana software company named Orchardsoft, came over and sat down at a table in the lobby with me and took care of the problem.

It turns out she plays, “wherever the coach puts me, but mainly outfield, second base, or pitcher. But mostly centerfield at the Games.”

When we talked later, she explained, “we have multiple teams in age groups ranging from 50s to 80s. We not only play softball but do volunteer events locally and mentor two high school softball teams in the Denver area.”

There’s an easy camaraderie that emerges as runners warm up on the track and the infield, preparing for their event.

Thus I walked up to two runners with their Barbados tops to meet them. They were part of the 14-woman and four-men Barbados team, and one told me he had been at the Games 10 times, winning three times. Both were in their 60s.

The Games were founded in1987 by John Morgan Jr., who died this past January, and in 1989 Huntsman, chairman of the Huntsman Corp., which would eventually be the world’s largest chemicals company, became the game's principal sponsor. He and his wife, Karen, had their own vision of the event’s potential, not only for the seniors drawn to compete but for the region and the state.

After his 1995 surgery for prostate cancer, one of four cancers he battled, he and Karen pledged $100 million to construct a state-of-the-art cancer center in Salt Lake City, the Huntsman Cancer Institute.

It’s owned by the State of Utah and designated by the state legislature as its official cancer center.

The entrepreneurial Huntsman's chemical-derived products included Styrofoam containers for eggs before he turned 30 and clamshell containers in which McDonald’s packages its Big Macs before his 40th birthday.

He and Karen opened the Games yearly until a couple of years before his death.

It’s interesting to look at the growth that has occurred in the past quarter century in St, George, and the surrounding region, known as "color country" for the flat layers of red sedimentary rock carved into buttes, mesas, and narrow canyons.

As the thousands of Games-bound seniors have visited the region with its physical attraction and sunshine-dominated weather, the growth that has accompanied the games, and been at least partially due to them, has been phenomenal.