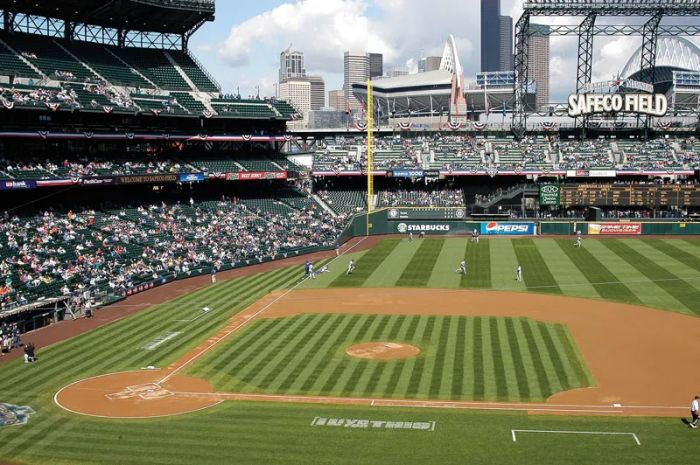 As the Seattle Mariners commence the post-All-Star break half of a season that ended its first half with sizzling success unseen in this area for two-plus decades, analysts and sports writers struggled to determine what brought about the success of a team went from a disastrous season start to now the most interesting in all of Major League Baseball.

Certainly, watching the team’s commitment to victory as a group of young men and the emergence of a couple of all-star players who have been hits off the field as well as on have been satisfying for long-suffering fans.

But I think it’s equally interesting to catch the excitement of the guy who occupies the owner's box, seeing a team that is finally achieving what has (clearly) driven John Stanton since the direction of the franchise became his as owner six years ago, giving his community and its fans a winning team.

Stanton became the CEO and majority owner of the Mariners in April of 2016 after the ownership group he led completed its purchase of the Mariners from Nintendo of America, and later that summer, Major League Baseball formally approved the sale of the Mariners to Stanton.

John Stanton
Mariners owner John Stanton's site set on enjoying the second-half run as '...basically just a fan'
He had become an owner in 2010 with the purchase of the 10 percent that John McCaw had held since the original ownership group that was put together in 1992, headed by Nintendo of America, at a time when Stanton, a telecom innovator, and entrepreneur, wanted mightily to be involved as an owner but admitted he didn’t have the capital available to join the group at that time. He was launching Western Wireless and once told me he and his wife, Theresa Gillespie, were paying his 100-some employees out of their personal checking account.

Buying out one of the cellular-icon McCaw brothers was appropriate since Stanton had been the first hire for Craig McCaw in the mid-80s when he created McCaw Cellular and helped him grow the telecom company over the rest of that decade before leaving with Craig’s blessing to launch Western Wireless.

Over the next decade, Stanton’s leadership satisfied many shareholders of the wireless companies he created and guided.

Since I was among those shareholder beneficiaries, I offer a story I shared with Stanton 20 years ago about my wife and me deciding we had an interest in investing in wireless companies. So, we bought stock in Western Wireless in 1992 for $15 per share.

The shares grew in value into the $60s before Western Wireless spun off Voicestream Wireless, a subsidiary created in 1994, into a separate publicly traded company that was soon trading in the mid-80s, as I recall, making the Western Wireless and Voicestream shares together worth about $130.

When I visited Stanton at an event in the early 2000’s I told him, prompting a chuckle: “my wife and I burn incense each evening before your picture in thanks for the shares’ performance.”

Voicestrean Wireless, in fact, in 2002, was renamed T-Mobile as it became the Bellevue-based subsidiary of Deutsche Telekom and now has its name now on the Mariners’ domed stadium.

So now Stanton’s sights are focused on satisfying ticketholders, who apparently will be coming to T-Mobile Park in the coming days in stadium-filling numbers, reminding me of a quote I included in a pre-season column recalling that 1992 opening day and the new group of local owners that would save MLB for Seattle: “I am first and foremost a fan. I love the game and everything about it.”

Stanton told me in one of our interviews how he attended Seattle Pilots games as a 14-year-old watching his hometown team with his father in the team’s only year of existence and said he recalled crying when the Pilots left town for Milwaukee.

Now the Mariners, who brought a record of 22 wins in their last 25 games into this week’s All-Star break, head into the second half with a record of 51-42 and trail the Astros in the American League West by nine games.

Whether playoffs or further post-season activity lie ahead to remind Mariner fans and the communities the franchise serves of what the last playoff 21 years ago felt like remains to be seen.
There will be heroes who perform at the plate, in the field, and with their competitive zeal between now and October, and their efforts may restore memories of the achievements that long-time Mariner fans recall.
Tweet
Tags:
Mike Flynn Economic Development business corporations people mariners MLB local ownership MLB
Lynn Brewer seeks to assist two crises, global war...
Growing awareness of holistic healthcare guides na...