A Decade of the most memorable Harps 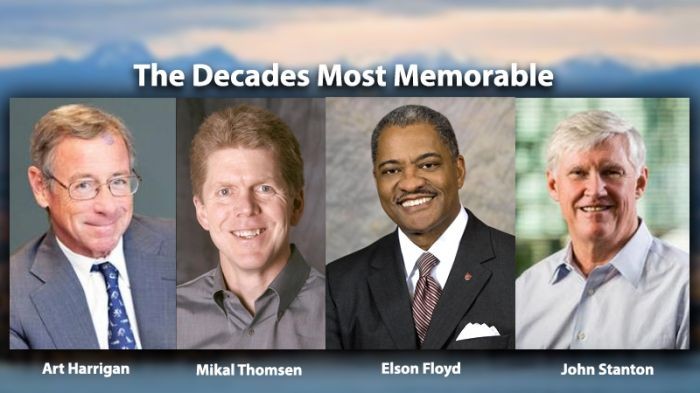 Few journalistic tasks could be more subjectively challenging than that undertaken by various media entities as the old year faded into a new decade and they chose the best or most important news stories of that decade past. Thus came revisiting of the education funding battle, the various clashes over Sound Transit, the drama of Amazon's quest for a second headquarters, Boeing's travails and ventures into the absurdity of the Seattle City Council's machinations. But for me the challenge was easier: choose from a decade of Harps the stories most memorable to me, some of which got little in the way of broad visibility. These are not my most personal Harps like my daughter's selection for the Oregon Supreme Court, my involvement with the rise of the young biotech company, Athira, from being its first outside investor to watching its move toward national Alzheimer's treatment visibility, or my almost yearly opportunities to compete in the World Senior Games. But ones with broad impact that deserved more recognition.

The story that may have been the most impactful on the Seattle area in several ways was about Seattle attorney Arthur Harrigan, Jr., who had key legal roles in saving two of Seattle's professional sports franchises.

Harrigan's low-visibility legal maneuvers forced absentee owners Jeff Smulyan of the Seattle Mariners and five years later Ken Behring of the Seattle Seahawks to be pressed into allowing time for local buyers to be found rather than being permitted to move the teams.

The legal confrontations with the owners of the two professional sports teams came about because Art Harrigan's law firm, now Harrigan Leyh, long represented King County on its legal issues. And the owners of both the Mariners and Seahawks came into conflict with the county because they sought to abandon the county-owned Kingdome and their leases there.

Because the Mariners' decision occurred in arbitration session rather than court battles, there was no media visibility for Harrigan's victory that required Smulyan to not only allow an opportunity to find a local buyer but had the arbitrator set a "local value" $35 million below market value for the franchise. No visibility, that is, until Harrigan shared the stories with me nearly four years ago (search Flynn's Harp: Art Harrigan).

And five years after the Mariners were saved, a series of Harrigan legal maneuvers that ended up before the State Supreme Court and eventually NFL owners, left enough uncertainty about Behring's likely ability to move the Seahawks to LA that he sold the team to Paul Allen.

Harrigan's arbitration victory with the Mariners allowed the high-visibility work of then Sen. Slade Gorton and John Ellis in landing Nintendo as the new lead owner to unfold and Paul Allen to emerge as Seahawks owner. But Harrigan deserves a moment of thanks as each Mariner season opens and when Seahawk fans gather for the first game of the year.

The story I personally found most memorable was the quest of Washington State University, President Elson Floyd, to convince a legislature that was initially reluctant to give him a hearing, to create a medical school at WSU.

Getting the 2015 Legislature to approve the creation of a new medical school at WSU, despite bitter opposition from the University of Washington and its powerful lobbying influence, was the crowning achievement of Floyd's eight years as WSU president.

It only later became known, as his battle for his medical school was being won through the tireless effort of hours of testimony before legislative committees and engaging lawmakers in one-on-one meetings, that he was waging another battle.

Floyd apparently learned early in that 2015 session that he had colon cancer, which before long he learned would likely be terminal. But he fought with equal determination for the next four months against his cancer, a battle he would lose, and for his medical school, a battle he won.

He died on June 20, 15 days before Gov. Jay Inslee signed the bill containing the first $2.5 million to launch what would soon be named The Elson S. Floyd College of Medicine, which would be located in Spokane and grow to serve communities in all parts of the state.

As a member of the national advisory board for what is now the Carson College of Business, I had the opportunity to get to know Floyd from soon after his arrival and was stuck, as many others were, with his focus on his conviction about what he viewed as the job-creating mission of higher education.

"We need to communicate with the Legislature and policymakers that we understand that we are about creating jobs, about economic development," Floyd said at his first meeting with the advisory board.

Thus he transformed WSU's role as Washington's land grant university into something far broader. He stood at the national forefront of college leaders in understanding that the role of universities in economic development was destined to become the issue it has become in most states.

And the Elson S. Floyd College of Medicine, in August of 2017, welcomed its first 60 students to its Spokane campus.

What I describe as the most interesting business-sports story of the decade was the decision by two of the icons of the cellular-wireless era to bring their mutual love of baseball to develop alongside their affection for their wireless business.
John Stanton and Mikal Thomsen were in their 20s when they teamed up in the early '80s at McCaw Cellular to become part of the birthing of a fledgling communications technology whose growth globally they helped guide through several major companies over the next 20 years. Stanton was actually second in command at McCaw.

Now in their early 60s, both have parlayed their business success into owning and guiding professional baseball teams, a commitment both might well agree is a passion that rivals their business activities. Stanton is the majority owner of the Mariners and Thomsen majority owner of the Tacoma Rainiers, making them an anomaly in all of professional baseball since the Rainiers are the Triple-A franchise for the Mariners.

A business focus remains, however, as they continue to manage their Bellevue-based wireless venture and investment firm, Trilogy Partnerships, formed by a collection of long-time wireless partners after the sale of their Western Wireless to Alltel Corp. in 2005.
Stanton's and Thomsen's baseball involvement extends across the state and down to the West Coast League, an amateur collegiate summer league, where they are among owners of both the Walla Sweets and the Yakima Valley Pippins.

That baseball tie began, in fact, with the Walla Walla team in 2010 when Stanton, an alum of Whitman College, where he served as member and chair of Board of Trustees, called Thomsen and advised that he wanted him to join the ownership group Stanton was forming.

Thomsen returned the favor in 2011 when he advised Stanton that he was fulfilling his boyhood dream of owning his hometown Tacoma Rainiers team and wanted Stanton and his wife Theresa Gillespie, to join the ownership team.

In both Thomsen's and Stanton's cases, their love of baseball stems from childhood memories.

Thomsen once told me that the opportunity to create the ownership team that bought the Rainiers was like his "dream come true." He would be owning his hometown team that he had grown up rooting for from the time his dad took him to his first game at age three. That was the year that the then-Tacoma Giants returned after a 55-year absence.

Stanton also recalls attending the games of his hometown team with his father. That was in 1969 when, as a teenager, he became a fan of the Seattle Pilots in their first and only year of existence and recalls crying when they left town for Milwaukee.

So now Stanton, who took the title of Mariners CEO for a time after the ownership group he led bought out Nintendo, then turned over that role to Kevin Mather, has returned to officing fulltime in Bellevue where he can wander into Thomsen's office any time to discuss either baseball or wireless.

(The second article in this two-part series on my most memorable stories of the decade will be sent tomorrow. They will include a Harp that's my personal favorite because it's about my friend and former colleague, Vietnam correspondent Joe Galloway and his interviews with Vietnam veterans. Then there's the most overlooked story of the decade: the amazing commitment by Bellevue businesswoman Joan Wallace to the children of Granger, and finally the story of the locally overlooked but globally successful promoter of the sport of squash, Shabana Khan)
Tweet
Tags:
Economic Development Mike Flynn Schools Government business corporations people issues Politics
PART 2 - A Decade of the most memorable Harps
Type Art of Old helps say "Thank You" for 2019