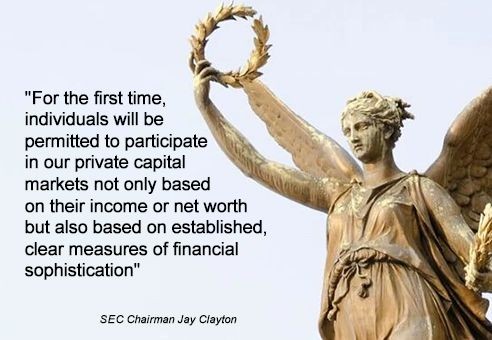 Angel investor leaders are applauding a Securities and Exchange Commission decision that essentially adds brainpower to wealth as qualifications to be "accredited investor." The decision is seen as a key to bringing more investors to the capital market at a time when the COVID-decimated economy needs a dramatic assist, as well as in the future.

Those angel leaders in the Northwest and elsewhere that I reached out to for comment saw the decision as an "enlightened" action by the federal regulatory body and one likely to bring much-needed capital to early-stage companies.

What the SEC did earlier this month was amend its "accredited investor" definition to allow investors to qualify based on defined measures of professional knowledge, experience, or certifications in addition to the nearly four-decades-old tests for income and net worth.

"For the first time, individuals will be permitted to participate in our private capital markets not only based on their income or net worth but also based on established, clear measures of financial sophistication," said SEC Chairman Jay Clayton, in a statement accompanying the August 19 announcement.

An accredited investor is an individual or a business entity that is allowed to trade securities, often higher risk, that may not be registered.

Prior to this SEC decision, investors needed to earn at least $200,000 in annual income ($300,000 for married couples), or have $1 million in net assets, excluding their primary residence, to count as "accredited."

For decades, the SEC had allowed only the wealthy to make private venture investments, largely because of their presumed greater ability to sustain losses and fend for themselves.

After this change, having sufficient "knowledge and expertise" is all it takes.

"This enlightened SEC action will pave the way for thoughtful sophisticated investors to invest in the startup community and bring much-needed capital into very early-stage companies," said Bill Payne, viewed by many as the nation's dean of angel investors. Payne has not only invested in a number of Northwest startups but has launched angel-investor groups in a number of cities.

"There are 400 angel groups in the U.S. in all kinds of different neighborhoods: urban, rural, academic. cross-border, etc.," added Payne, who in addition to his angel-investor leadership in this country spent a year in New Zealand, at the invitation of that nation's government, teaching angel investing. "I am sure some ecosystems will choose to focus on sophisticated investors."

"My angel colleagues generally welcome this regulatory improvement because it will bring more business-literate shareholders to the high-risk equity sector," said longtime investment leader John Fluke, chairman of Fluke Capital, which he has guided since its founding in 1981. "And perhaps it will induce high-risk equity enterprises to develop more pragmatic and realistic business plans."

"That definition now includes individuals with specific investment subject-matter expertise, regardless of whether such individuals met traditional annual income and net worth criteria," added Fluke, who is now mostly involved in angel investing.

"I am pretty excited about this SEC action," enthused Elizabeth Marchi, whom I have described in several columns as "Montana's queen of angel investing" because she oversaw three angel groups in the state from her and husband, Jon's, cattle ranch near Polson.

Marchi, who now serves as the head of marketing for an interesting new White Fish-based venture fund named Two Bear Capital, said the decision "embodies Chairman Clayton's attitude that there shouldn't be arbitrary thresholds. This will help reach innovators and problem solvers beyond the ecosystem centers."

"However, this decision could have an important long-lasting impact beyond the pandemic," added Sudek, who in his post-angel career helped guide creation of the Applied Innovation Center at U-Cal Irvine and serves as its executive director and Chief Innovation Officer. "It could accelerate small business starts as well as help small businesses grow quicker and larger."

"I do feel the expansion offers an opportunity to grow the private investment community for early-stage companies," offered Brianna McDonald, who with her husband, Nathan, guides the Northwest chapter of the international angel investor network, Keiretsu. He is CEO and managing partner and she is president of the Keiretsu Forum Northwest.

"As a membership organization we depend a lot on leveraging others' experiences and expertise and over the years we have called on these individuals to help with diligence, but they would do the work and not be able to participate in the investment," she said. "With the potential pool opening, we now need to put an even bigger focus on education."

In an example of the perpetual dynamic tension on the five-member commission over its conflicting roles of facilitating capital formation while protecting investors, the two Democrat appointees voted against the decision, saying it could leave investors vulnerable.

Gary Ritner, founder and president of the Puget Sound Venture Club, the Seattle angel group that celebrates its 35th anniversary this fall, suggested there was some legitimacy to the concerns of the SEC's minority.

"With statistics indicating that on average half of the deals that attract angel investment go broke in the first two years," said Ritner. "Long term, an investor will likely make money, but how many of this type of investor can emotionally live with the potential of the early losses."

But having offered those thoughts, Ritner shared with me the strongly positive reaction of the Angel Capital Association (ACA),
The North American professional organization of active accredited investors.

"This action will significantly impact the availability of capital to cutting-edge innovative start-up companies that are the foundation for job creation in our nation," said the ACA.