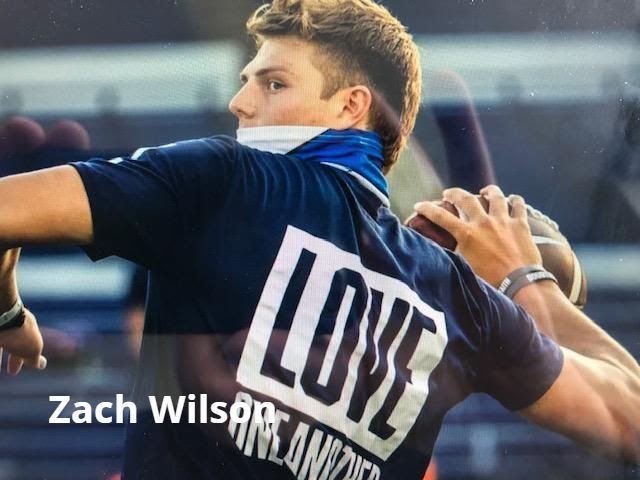 This began as a story of a young football star from Utah named Zach Wilson who, because his intense love of family matches his intense love of competition, decided that the scholarship he would accept of 18 offered was one that would allow him to come home for dinner most Sundays.

But as the story of the BYU quarterback star’s rise toward the top rung of national collegiate football fame begins to make its way across the country, it will hopefully bring with it the equally special story of his team of young men who understand their place in society extends well beyond the football field.

Wilson was already committed to Boise State from among offers from schools around the country before he decided, at the end of a four-hour conversation he and his mom, Lisa, and dad, Mike, had with head coach Kilani Sitaki to accept a scholarship to Brigham Young University.

As the four-hour meeting ended, coach Sitake, a one-time starting fullback at BYU and the first Tongan to become a college head coach (likely another good story!) made one final pitch.
‌
“Zach, you can drive home every Sunday night and have dinner with your family.” Offered Sitaki, knowing Wilson’s home was in Draper, about 18 miles from BYU in Provo.

But part of the shared family love was the acceptance by the broader family, all lifelong University of Utah alumni, fans, ticketholders— Wilson’s parents had seats adjacent to Utah coach Kyle Whittingham’s family on the 50-yard line—of Zach playing for the hated BYU Cougars. Wittingham had been prevented from offering Zach a scholarship because of a promise to his top quarterback choice from Southern California.

And the reason I know of this story is because of that “beloved” grandpa, Lisa’s father, is my longtime UPI colleague as western executives for the wire service and friend for decades, Gary Neeleman, whom I have written about (search Flynn's Harp: Gary Neeleman) because of his own prominence as perhaps Brazil’s most honored American and author of books on that nation’s history.

But for Wilson’s touching personal story, and the equally touching one of his teammates, to garner national attention there had to first be an attention-getting sports story, as in Wilson’s performance in guiding BYU to an 8-0 record this year, including Friday’s 51-17 blowout of 21st ranked Boise State.

That national attention for Wilson, a junior, is coming to include suggestion from a growing number of observers that he’s a legitimate candidate for the Heisman Trophy, college football’s most cherished honor.

And the manner in which the team runs onto the field with Zach carrying the American flag and brother Josh, a freshman linebacker who chose BYU because he wanted to make sure he played with his brother, carrying the Utah flag is also drawing attention.

Thus to the story of his teammates whose focus beyond sports is deserving national attention as well, a group of young men, many of them, like Zach, Mormons playing for the university-owned and operated by the Mormon church, the church of Jesus Christ of Latter-day Saints.

With the surge of comments and actions from athletes on the field and off in the wake of social unrest and awakening, particularly this past year, the BYU team felt it also needed to send a message.

At a mid-summer meeting, junior wide receiver Dan Milne explained, “We had an open forum about what we thought should be the message. We really tried hard to make it a message that was not controversial at all, and someone mentioned ‘love one another,’” a teaching of Jesus Christ that resonates deeply with members of The Church.”

So for its opening game against Navy, the team unveiled T-shirts that they’ve worn in pre-game warmups all season that say in black letters “We Are One” on the front and “Love One Another” on the back.

Then the players learned of things like licensing of the shirts and have sold them and raised money to go toward scholarships for needy kids. And it could become a most sought-after T-shirt once the story of it spreads across the land.

As to Zach’s leadership of this team, one who knows him remarked: “Inside roils a restless, steely determination to excel at his chosen craft, which often keeps him up late at night studying videos on his iPad instead of sleeping.”

But Wilson may also be driven in part by the Neeleman DNA.

Zach’s uncle David Neeleman earned fame as an airline industry innovator, founding Morris Air, WestJet, JetBlue Airlines, and Azul Brazilian Airlines and being part owner of Portugal’s national airline. He is waiting for COVID to end before launching his new airline, Breeze, that will be based in Salt Lake City.

Uncle Stephen Neeleman, who attended Utah State on a football scholarship and was an Academic All-American and USU Man of the Year, went to medical school and became the head of trauma surgery at American Fork Hospital. But prompted by his dislike of the medical insurance industry, he started HealthEquity, the country’s first and largest health savings account company that is basically a 401(k) for paying health costs.

His aunt Julie manages the family’s 10,000-acre Zion Ponderosa Resort that abuts Zion National Park and is ranked among the best family retreats in the U.S. by U.S. News and World Report.

The patriarch and matriarch of this dynamic Neeleman clan are Gary and Rose Neeleman, who have been married 62 years and preside over seven children, 36 grandchildren and 28 great-grandchildren. “They are the glue that holds it all together,” says Zach.

They are both 85, as of Rose’s birthday last Saturday, and still working. Brazil, their second homeland, offered Gary a job 20 years ago as an honorary consul for the 20,000 Brazilians who live in the Intermountain West. Gary told me he has just committed to another three-year term for the country he and Rose have visited every year since 1964. Until this coronavirus year,

A couple of notes about Gary’s ties to what he proudly notes is the second-largest nation in the Americas, in both land mass and population, a nation he first got to know in his youth as a Mormon missionary then for a decade as UPI’s manager for Brazil.

He’s written three books on parts of Brazil’s history, the last one several years ago won recognition as the best non-fiction work in Latin America.

After he returned with UPI to Salt Lake City, he set up annual trips for college all-star basketball teams, including 1979 national champion Michigan State and its star, Magic Johnson, to play games around Brazil and offer coaching help to local players. For a decade he was a luncheon speaker at the NCAA Final

In 2015 he received an unusual honor as the fourth recipient of an award whose English translation is Citizen of Sao Paulo. The three other recipients of the honor named for the State of Sao Paulo were the Pope, the Dalai Lama, and the founder of the Mormon Church in Brazil.

But back to Zach, whose family, filled with ardent University of Utah fans, came around to the idea that one of their own would wear the BYU blue and white. They were singing Christmas carols at a Neeleman family party after he had made his decision when suddenly, all of them — Neeleman uncles, aunts, cousins, and grandparents — broke out with the Cougar fight song.

They were telling Zach they were behind him if that was the school he chose. He soon signed with BYU and at a subsequent holiday party with family, he put his arm around his grandfather’s shoulder and, looking at the noisy crowded room, said, “Grandpa, you know why I chose BYU? This is why.”

Tweet
Tags:
Mike Flynn Schools people
Lengthy effort to get documents in jobless-payment...
Quest for 20 to honor for COVID creativity and car...