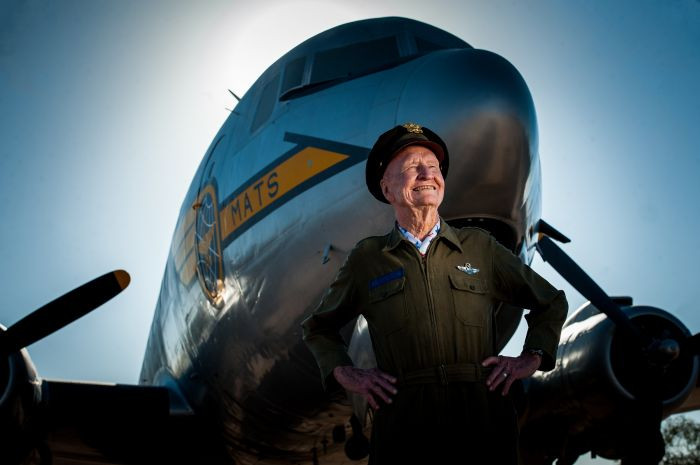 It was 73 years ago that Gail S. Halvorsen was among the group of U.S. pilots whose airlift of food and other needs to thwart the Soviet blockade of West Berlin saved two million Germans from starvation. But his lasting fame came as the pilot who became known as The Berlin Candy Bomber for his parachute drops of gum and candy for the Berlin children, earning worldwide attention, including a half dozen books written about him. 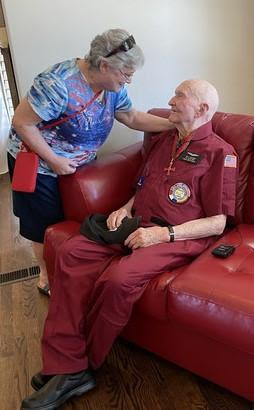 Regina Lovely and Gail HalvorsenThe Soviet Union blockaded the allied part of post-war Berlin from June of 1948 ‘til the fall of 1949 in an attempt to take it away from the allies, but the food drops by Halvorsen and his fellow pilots thwarted that. Included among other food and supplies dropped came 21 tons of candy.

Forward to today. The life-long Utah resident, a retired Air Force colonel now almost 101, made another flight Saturday, participating in a candy-drop flyover in St, George as part of the Southern Utah city’s Independence Day celebration tribute to veterans.

His daughter, Marilyn Halvorsen Sorensen, told Salt Lake City TV station KSL she asked him” “are you up for one more?” and he replied “Only one more?”

So he boarded the passenger seat of a helicopter that flew over Dixie State University’s Greater Zion Stadium and dropped bunches of candy onto the crowd.

Among those on hand to honor the Candy Bomber was Regina Lovely, a St. George resident who, as a then 3-year-old, was one of the first German children to receive candy from Halvorsen’s drops.

She credits Halvorsen with helping the people of Berlin find hope as she presented him with the inaugural Gail Halvorsen Lifetime Service Award, created by the organizers of the event.
“God Bless America,” he said to cheers from the hundreds gathered in the stadium.

His daughter, Marilyn, said “for me, this is a celebration of freedom. I just think it’s important for people to know his story because he talks about gratitude, attitude, service before self, helping other people, and saying small things make a difference.”

She says she hopes his story conveys the message of “just be kind to each other and help where you see a need.”

Halvorsen remembers the special honor he received five years ago when the Mormon Tabernacle Choir invited him to be honored at the tabernacle where the assembled crowd burst into applause as tiny parachutes with candy attached started floating down from the ceiling.

Asked whether the July 4 celebration’s candy drop would be his last, one member of his family said “he will continue to do it until he’s in the ground.”

This may seem like an unusual story to be in The Harp, but when my friend Gary Neeleman of Salt Lake City sent me a link to the story from KSL, I felt it’s the kind of story that needs to be told with a message that needs to be shared at a time when stories of the good things people do seem to not get the visibility that could cause people to pause and reflect.
Tweet
Tags:
Mike Flynn Politics berlin candy bomber wwII Air force Berlin 1940's
Purging ancient emails: Stirs memories and brings ...
Reflecting on AT&T breakup, the innovative success...