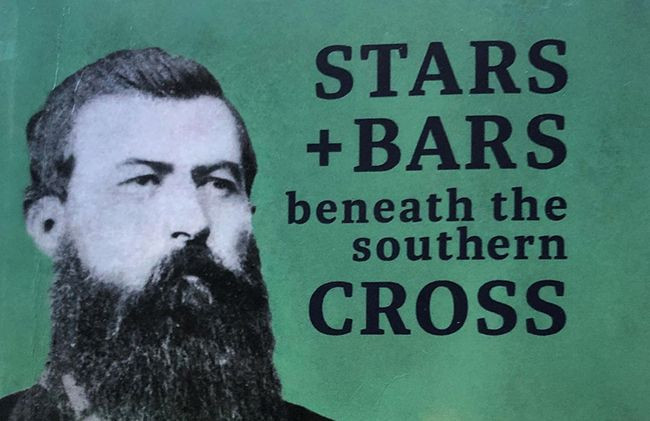 The most interesting chapter of American history to me is the one that's difficult to find in history books, which makes it the more intriguing. I am referring to the decision by thousands of southerners to head south to Mexico and Brazil to carve out new lives rather than return to the nation that had defeated them in this country’s War Between the States.

At a time when this nation is politically divided, perhaps more than at any time since then, with some extremists even talking of civil war, there may well suddenly be an interest in that chapter of history and what happened to those who left after losing.

And in the reading of the southerner’s decision to leave, it becomes entirely believable that the vengeful treatment visited on the vanquished by the victors would be intolerable enough that many would gather the courage to find a new home and a new way of life, not seek to restore the old way.

After all, their cities lay in ruins physically, economically, and socially and their treatment was intended to ensure that the South would never rise again.

The story of the Confederates who went to Mexico is an adventure story that merits its own chapter in a Civil War textbook. At the same time, the emigration to Brazil is a story of family ties that still endure today. I’m reminded of the first English book on the Brazilian confederates, known as Confederados, which arrived in my mail a few days ago.

First about the Confederates who headed to Mexico, who numbered about 2,500 and included the governors of several states, including Texas, and a number of prominent generals, including “Fighting Joe” Shelby, who refused to surrender and led the 1,000 or so that represented what was left of his forces across the Rio Grande.

Maximillian I, an Austrian prince and the brother of Emperor Franz Josef, had been put in place by France as the emperor of Mexico, replacing Benito Juarez, the president who was overthrown. The leader of the southerners, who sought to recreate the Confederacy in Mexico, was Mathew Fontaine Maury, a personal friend of Maximillian, viewed as the father of oceanography at the time, whose “Physical Geography of the Sea” in 1855 was the first extensive book on oceanography ever published.

Maury had worked out a plan with Maximillian to set aside 500,000 acres in agricultural areas around Mexico City for the Confederates to each have 640 acres at $1 an acre. But Maximillian was captured by Juarez’s revived forces and executed in 1867, so the Confederates’ dream died, and they drifted away, including back home.

I was reminded of the Brazilian Confederates when I received the book, recently published in English and likely the best-researched book on that migration, the gift of my longtime closest friend, Gary Neeleman, and his wife, Rose. “The Stars + Bars Beneath the Southern Cross,” first published several years ago in Portuguese, the language of Brazil, following years of Neeleman research and interviews with descendants, is the story of the largest group of southerners, between 5,000 and 10,000 Confederados, who answered the invitation of Brazil’s Emperor Don Pedro II to move to his country. 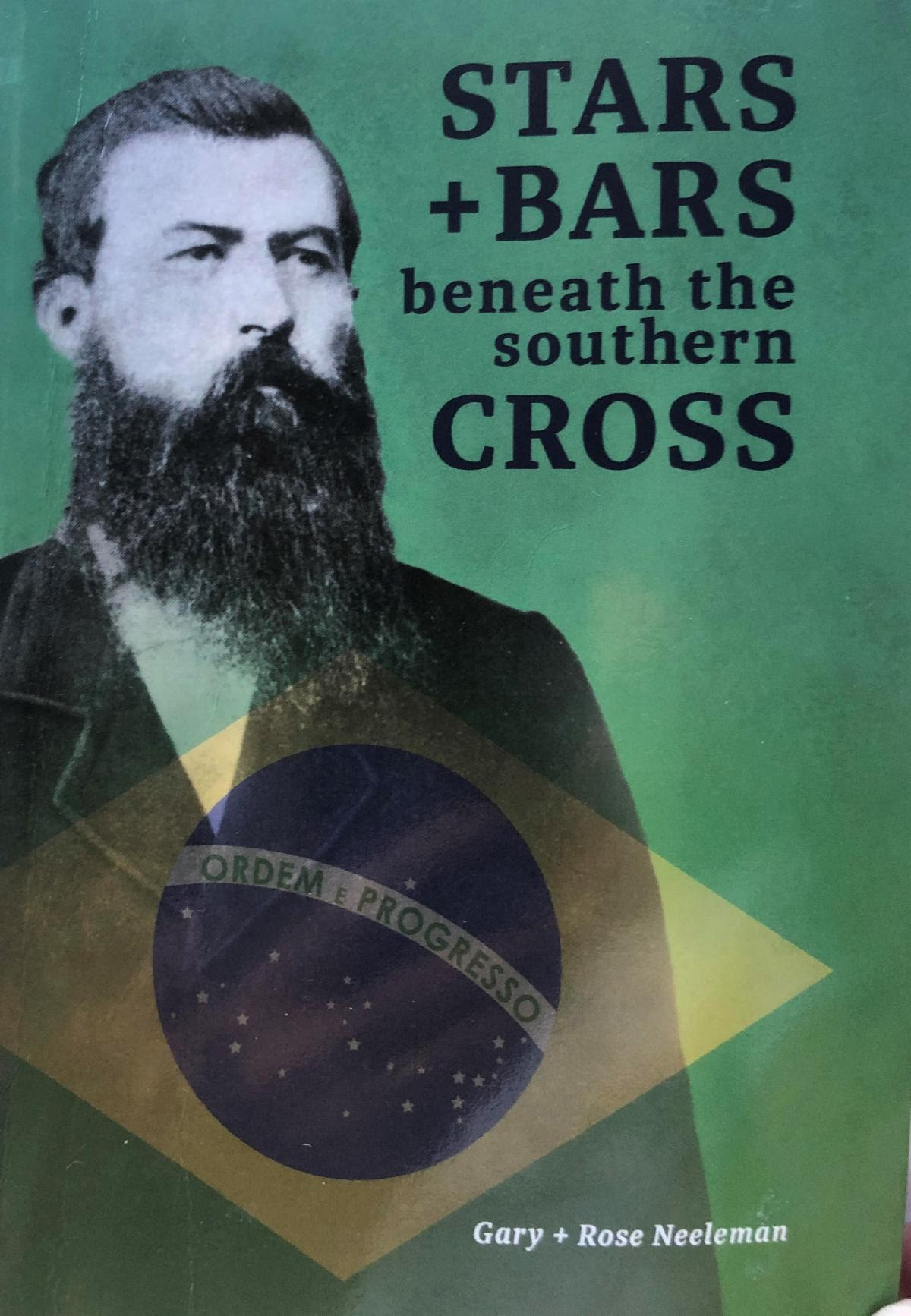 The story of Robert Norris (on the cover) as a soldier turned medical doctor is a key story of the confederates' new life in BrazilThe emperor's goal was to plant the seeds of Brazilian prosperity, including creating a cotton industry, by importing the self-exiling Southerners, who settled southwest of Sao Paulo in two communities a couple of miles apart, Americana and Santa Bárbara d'Oeste, a fertile belt of green, rolling hills with unmistakable similarities to their southern homeland. The first arrivers were met at the dock by the emperor.

Readers of The Harp will recognize that I’ve written on the topic of Neeleman and the Brazilian confederates before for various reasons, most recently five years ago about the gathering of 2,600 confederate descendants to mark the 150th anniversary of the arrival of their ancestors in Brazil. The anniversary gathering was the annual picnic at Cemeterio de Campo, where hundreds of "Confederados" are buried, located between Americana and Santa Barbara.

Neeleman, a longtime colleague at UPI and a friend of 50 years, who has been the subject of several Harps over the years, first visited the cemetery in 1963 as UPI's manager in Brazil, a nation he first saw as a young Mormon missionary. The idea for a book began to take shape with that 1963 visit. He has made more than a dozen trips to the cemetery for the annual picnic since then, often with Rose, as they gathered information from descendants and collected some of the thousands of photos they now have.

My suspicion about the lack of interest in historical focus on the Brazilian confederates is the inaccuracy that they wanted to take slavery with them. Thus, there was a question of why they should be remembered, a sense that has become more intense in the past couple of years as racial issues have created a greater focus on anything related to slavery.

Those who went to Mexico knew that slavery had been outlawed there for 40 years, so it’s clear it was not a topic on their mind. Various groups of freed slaves also headed to Mexico to begin new lives.

And it’s interesting, as to Brazil, that among the historical bits of information in the Neelemans’ book is this passage:

“Readers should understand that slavery was not a consideration for them as they transplanted themselves into a new land to start a new life,” Neeleman wrote. “In our extensive research, we found mention of only one slave, Sylvie, who came with one of the immigrant families because she could not bear to be separated from ‘the family.’
“Some of the immigrants purchased farms and ranches that had slaves, as slavery was not ended in Brazil until 1888,” Neeleman noted.

“However, in most of the cases, the slaves were freed and became employees of the landowners, some of whom explained that they wished to be able to replace employees who were not good workers, rather than be totally responsible for them,” Neeleman added.

The book is filled with stories of various families on whom the Neelemans did extensive research, and it was the family aspect of the emigrants that I suspect has most attracted the Neelemans, he now 88 and Rose 87, and their large family of seven children, 36 grandchildren, and 41 great-grandchildren.

“Rose and I firmly believe that families are forever and the fact that these confederates were so family oriented and determined to keep their families together was fascinating to us because they sacrificed everything to make that happen,” Neeleman said. “When they got to Brazil, they ensured that their families were intact and continued on just as they were in the homes they left.”

The descendants of the Confederados left their mark not only on the economy of Brazil but also on its culture and development.

"MacKenzie College was founded by the confederados in Sao Paulo and, with five campuses around the country, it is one of the top colleges in Latin America," Neeleman said.

"And a second-generation Confederate founded the big hospital in Sao Paulo, Samaritano Hospital, where three of our kids were born," he added. One of the three was David, founder of JetBlue Airlines, who returned to his second country to found Azul, now one of Brazil's largest airlines.

Because of his close ties to Brazil, a few years ago, he joined the Pope, the Dali Lama, and the founder of Mormonism in Brazil as one of the recipients of the “Citizen of Sao Paulo'' award. And in his official role as Brazilian Consul in Salt Lake City, Neeleman has for years been asked to take guests to the annual gathering at the cemetery for years.
The story of Robert Norris (on the cover) as a soldier turned medical doctor is a key story of the confederates' new life in Brazil.

It was shortly before Jimmy Carter became president that Neeleman escorted him and his wife, Roselyn, and Jody Powell, who would be Carter’s press secretary, to the cemetery, and Gary told me, "It touched your heart to see their tears as they looked over the Georgia graves and 'Dixie' was played."

"The stars and bars of the Confederate battle flag are visible everywhere at the cemetery,’ Neeleman said. “But it's important to know that wasn't the flag of the Confederacy rather it’s the flag that was carried into battle during the civil war and thus is looked upon as the symbol of their states' rights and the basis for remembering their country.”

The Neelemans’ book contains the stories gleaned from notes, letters, and interviews with descendants, of a dozen families.
But the foremost was the family of Col. William Hutchinson Norris, a state senator from Alabama and an important Confederate figure who led the group to Sao Paulo and established Americana as well as Santa Barbara. A gathering at his mansion in Montgomery, Alabama, in 1965, was apparently where the plan to move to Brazil was hatched.

An interesting story about Norris relates to his son, Robert Cicero Norris, who had fought in 37 battles against northern troops with Stonewall Jackson and was dying in a Yankee prison from his wounds.

Norris family lore tells of a secret meeting between the senior Norris and Abraham Lincoln for his son's release from prison in exchange for Norris agreeing to play a role in supporting reconstruction. Robert was released, but the subsequent assassination of Lincoln created the family's decision to head to Brazil.

Part of the family's memories, most coming from Gary’s three trips to Danville, VA, to interview Kennie Adams Bletz, Robert’s youngest daughter, was the tender moment when the old colonel looked at his son and asked him if he would go to Brazil and Robert, still weak from his wounds and barely able to stand, said: “Pa, I’d follow you to hell!”

After Robert arrived in Brazil with his father, he decided to return to Alabama to go to medical school and became a doctor, as Gary told me, “He delivered practically every baby in the confederate colony over the next half-century.”
Tweet
Tags:
Mike Flynn
Cantwell's role in CHIPS bill passage was a reviva...
Lynn Brewer seeks to assist two crises, global war...