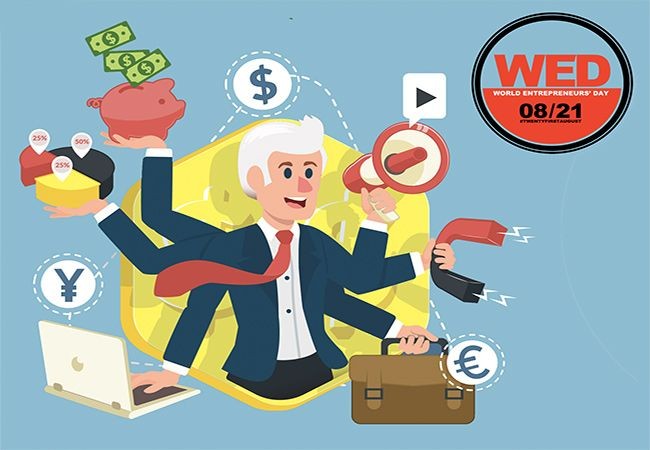 The director of Income Security at the AARP Foundation, Aliza Sir, seems an unlikely messenger for her talks to entrepreneur-support groups with her attention-getting message that today's entrepreneurs are just as likely to be empty nesters or grandparents as typical tech-savvy younger people.

So it's appropriate on this World Entrepreneur's Day, created by the Alliance of International Business Associations to focus awareness on entrepreneurship and innovation, for the entrepreneur-focused Kauffman Foundation to discuss "encore entrepreneurs," in keeping with Sir's message.

When I retired in 2006 and bought the domain name "Entrepreneurial encore," it was because I knew that would characterize my post-retirement path and that at some point, I could create a website with that focus for others seeking the same encore. I just didn't realize that I was merely ahead of the curve.

Kauffman, the Kansas City, MO, organization that is the nation's largest non-profit focused on entrepreneurs, notes that "America is not getting any younger," adding that "in fact, last year the U.S. Census Bureau's national population projections forecast that by the year 2030, older people, 65 years and older, will outnumber children under age 18 for the first time in U.S. history."

And Kauffman's most recent Index of Startup Activity points out that the highest rate of entrepreneurial growth over the last few years is not Gen Y startups but Boomers over the age of 50, a trend that has attracted the tag "Encore Entrepreneurs."

According to the Kauffman Indicators of Entrepreneurship, the percent of the U.S. population that starts a new business is highest in the 45 to 55 age category at 39 percent with the 55 to 65 age group following closely behind at 38 percent. In both age groups, the number of new startups trends upward. Moreover, the percent of new entrepreneurs who created a business by choice instead of necessity in the 55 to 64 age categories registers just over 88 percent, higher than any other age group.

"The future of work is something that we think about a lot," Sir added. "The trend of older entrepreneurs offers amazing potential for people to leverage their experiences, work for themselves, and transform Main Street economics. It's incredibly important to celebrate and lift up those entrepreneurs."

Comes now the State of New York with a leading-edge initiative that is most likely to spread to other states, and hopefully, Washington State will be at the forefront.
A bill called the "encore entrepreneur,", proposed by Sen. Rachel May, a Syracuse Democrat would establish training and education programs across the state to allow older citizens to more easily open and operate their own businesses. It's been approved by both houses of the legislature and is awaiting signature.

"What we're seeing in New York and around the country is that, more and more, there are people over the age of 50 turning to entrepreneurship," said the lawmaker's chief aide. "We need to understand that, while New York's population is getting a lot older, it doesn't have to be a problem. We need to see it as an opportunity. And one opportunity is the potential for encore entrepreneurs."

Supporters of the legislation say it will establish a more robust system that would allow the state to better incorporate older citizens into the economy.

As key supporters note, "many older people have significant work experience, deep networks of contacts and are typically placed in the low-risk lending category."

But many seniors often lack direct knowledge of starting and growing their own business or maybe intimidated to work in an incubator space surrounded by dozens of millennials decades younger.

The New York plan could lead to something like dedicated educational and mentorship programs directed towards seniors within a business incubator, or it could be a dedicated space for just seniors to work in.

"No state to date has done much to explicitly support senior encore entrepreneurship," he said. "One of the reasons that we felt a piece of legislation was important is to nudge the state into taking more of an active role," said the New York lawmaker's aide.

At my retirement party, as I left Puget Sound Business Journal's publisher role in April of 2006, the late Herb Bridge said to me: "I can't envision you being retired, Mike."

"Herb," I replied, "there are various ways to retire. It's like if your tires are getting in need of a change, you drive into Costco to get a new set of treads and you emerge re-tired and ready for another trip."

I figure an increasing number of those like me, including a number of friends reaching 70s and beyond, will find themselves looking to re-tire for a new trip and that a growing number of support services, including from states and dedicated workspace, will emerge to help fuel the trips.

My friend and venture capitalist John Fluke Jr. has a message for senior entrepreneurs that relates to not trying to fly alone and reminds those hoping to find investors for their businesses that most of the investors that seniors might hope to attract are likely to also be seniors, well into their 60s or beyond.

Fluke is chairman of Fluke Venture Partners and chairman of Athira, the regenerative-medicine biotech that is attracting national attention to its human trials on a drug to regrow brain cells and in which he and I were fortunate enough to be the first two investors (at dramatically different amounts!),

He says his interest in investing in an entrepreneur company has more to do with the team being assembled than in the age or gender of the entrepreneur.

A lone entrepreneur is going to be less interesting than one who has begun to assemble a team, Fluke said. "There's a reason why a commercial jetliner always has two pilots."