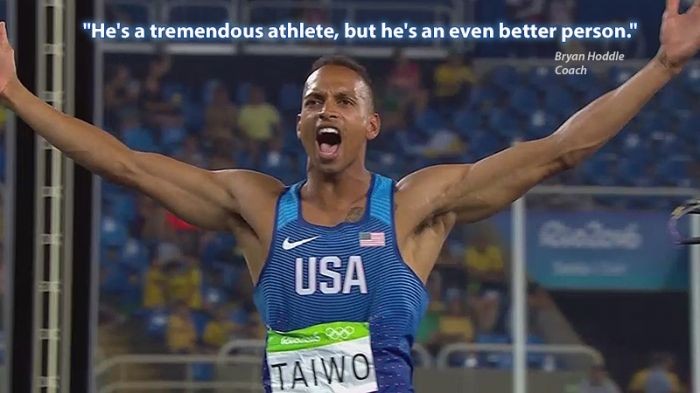 From the time Jeremy Taiwo was four years old, he knew he had to be an Olympian. After all, his father, Joseph Taiwo, a Nigerian who was recruited to Washington State University's track & field team, competed in both the 1884 and 1988 Olympics for his home country."Once I learned he had been in the Olympics and what that meant, I had to be the best and work the hardest," said Taiwo, a Seattleite who made the U.S. Olympic team last summer as the nation's second best decathlete and finished 11th at the Brazil games last year. 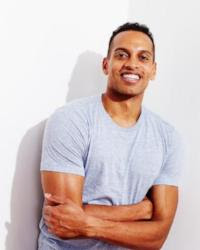 Jeremy TaiwoBut I have to make the next Olympics since he was there twice," Taiwo said of his father, who is now track and field coach at Newport High School, which Jeremy attended before competing for the University of Washington."My dad was ninth in his event but I was 11th in Brazil so I felt I still have something to prove."Both Taiwo, 27, and his coaches say they are convinced he has another Olympics in him, with two who provide some of his key training support disagreeing over whether he could be third in the next Olympics, or Gold.Although he's currently recovering from an adductor-muscle strain, when he returns to training he will be keeping his eye on the progress of the runners who present what Taiwo describes as "a fair amount of competition from different countries" for the decathlon event at the Tokyo Olympics in 2020.The competition includes Brazil Olympics Silver Medalist Kevin Meyer from France and Bronze medal winner Damian Warner from Canada, plus a pair of German athletes he describes as "incredibly talented," plus a couple of Americans."Since the dominant world record holder (Ashton Eaton) has retired, it will be interesting to see who is able to claim the title at the next Olympics," Taiwo said.But there is one area in which Taiwo lags dramatically behind his competitors, particularly the Canadian and the Europeans. That's the financial support that athletes like the decathlon competitors receive, and need, because of the training intensity and costs necessary in preparation for 10 events."They are getting an incredible amount of support," Taiwo said.. "I'm sure they all own their own houses at this point." That's a level of support he could only dream of."There's not a lot of love or appreciation for our event in this country anymore, it seems," Taiwo said of the competition whose Gold Medal winner was once automatically proclaimed "The World's Greatest Athlete."The men's decathlon consists of the100-meters, long jump, shot put, high jump, 400 meters, 110-meter hurdles, discus throw, pole vault, javelin throw and a closing, 1500-meter race.Each of those events in the two-day competition requires different skills -- speed, endurance, throwing, vaulting and jumping and thus decathletes are some of the most versatile athletes in the world.Although he had won the Pac-12 Decathlon competition as a senior at the University of Washington, he wasn't that well known until he placed second at the Eugene Track and Field qualifying last July, scoring 8425 points for the Silver Medal, 325 points behind Eaton.Taiwo recalled in an interview that going into the 1500 final event in Eugene, he was in fourth place and needed to beat the third-place athlete by 13 seconds. But he vaulted all the way to second and the Silver with his time of four minute-17 seconds."In a business sense, where people want to do the least amount of work and make the most money, that translates to athletes doing the most and paying them as little as possible," said Taiwo with a logical edge of frustration.It bothers Taiwo that decathletes aren't paid like world-class athletes since the top Olympic athletes in swimming, gymnastics and track and field can make six-figure deals with endorsements, others, like Taiwo, hardly receive enough money to make ends meet.Taiwo's mom, Irene, knew her son couldn't continue to wear himself out between training and work heading toward the 2016 Olympics, so in December of 2015 she suggested he start a GoFundMe account. GoFundMe is a fundraising website to support causes, where donations are welcome worldwide and where more than 100 Olympic hopefuls have created accounts.Taiwo and his family used Facebook to advertise the donation page, asking co-workers, family, and friends for help. Taiwo said people he had never met were donating hundreds of dollars to his cause. Taiwo's initial GoFundMe goal was $15,000, and by the end of January, to his surprise, he had surpassed his goal, eventually raising more than $40,000 and got an additional $10,000 for so significantly passing his goal.But he isn't interested in holding his hand out for donations henceforth. So he is hoping that the sponsor dollars that come out of the woodwork for some athletes might start coming his way in the coming months as a Seattleite who is considered a strong candidate for a medal, maybe gold, in Tokyo.So right now he's doing without the strength and conditioning coaches who would cost about $500 a month as well as the physical therapy sessions that included massage and strength training on which he last year spent $100 to $150 per week.A handful of Seattle and Bellevue business people have made up their minds to campaign among friends, associates, clients to support Taiwo.One of the prominent coaches offering him training guidance, Bryan Hoddle, who now lives in Phoenix said of Taiwo: "He's a tremendous athlete, but he's an even better person." Hoddle, one of the nation's top sprint coaches who now spends his time teaching veterans who have lost limbs how to run again, provides some training counsel for Taiwo from afar but that can't substitute for coaches and trainers here.Taiwo is the kind of young man who, despite his competitive focus, spends a considerable amount of time giving motivational talks at school, observing "it's awesome talking to kids because they are so interested."And Taiwo, who attended Newport High School although he lived in Renton because he wanted Spanish immersion classes and wound up with a 3.5 GPA, plus weighting, emphasizes to the kids the importance of education.Although the Tokyo Olympics is three years hence, Taiwo has benchmarks before then to measure his progress. Thus his short-term focus is on the USA Indoor National Championships in New Mexico in February, Indoor World Championships in March in Birmingham, England, and the Outdoor National Championships in June.