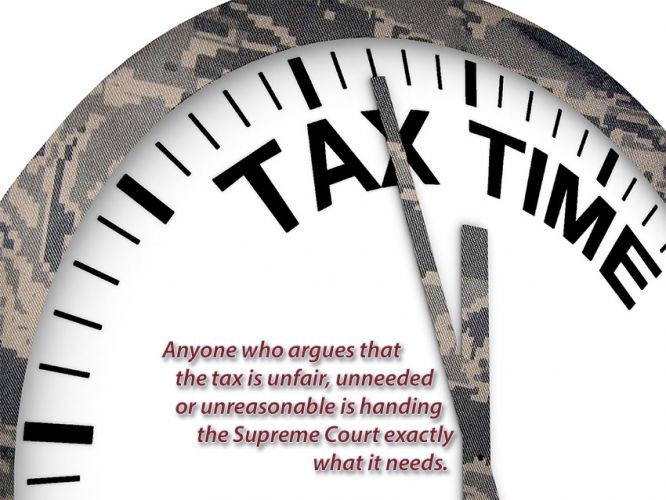 Fate seems to be dealing a losing hand to proponents of a state income tax, given events that have unfolded behind the scenes with the lawsuits filed since the Seattle City Council enacted a tax on higher-income residents as a strategy to reach the State Supreme Court with the issue.Their best hope now to achieve their goal is to be dealt a joker wild card by those on the other side who have sued to overturn the tax on the statutory grounds that the city violated the 1984 state law that specifically prohibits cities and counties from imposing a net income tax. The wild card could be handed to tax advocates because some of those suing the city seem tempted to turn it into a political issue that could be the key to unintentionally attracting the state's highest court.From the outset of a campaign flatly touted by council members and their cheering supporters as an effort to "tax the rich," the goal of tax advocates has been to get the State Supreme Court to review the 84-year-old decision that a net income tax violates the state constitution.Whether that campaign can move ahead may well be decided on November 27, the date set yesterday by King County Superior Court Judge John R. Ruhl for him to hear the motions by attorneys representing plaintiffs in three lawsuits filed against the city.Matched by those whose rhetoric is "we need to tax the greedy rich" is the equally heated commentary of those who oppose any tax and particularly taxes on the wealthy, who feel they are already overtaxed. The anger of the latter was evident in the comment made in private by one of the attorneys that their purpose is to "kill the income tax and drive a stake through its heart so it never comes back alive."As Matt Davis, attorney for Seattle investment advisor Michael Kunath observed: "What was supposed to be a purely legal exercise has devolved into the latest battlefield in the fight between two groups who have no hesitation about forcing their viewpoints on everyone else."Kunath's suit was the first of the three and thus was the one assigned Judge Ruhl by lottery and it will be Davis' motion for a summary judgement against the city tax that will be heard on November 17 with the motions by attorneys for The Freedom Foundation and the Opportunity for All Coalition to also be heard then.The first indication of the unanticipated challenges facing the city came when Kunath's suit, filed minutes after Mayor Ed Murray signed the tax into law following City Council passage, noted that the council fouled up in its maneuver to pass a tax that wouldn't be viewed as violating state law.The council members passed what they intended to be a tax on gross income rather than net income, but they chose the amount on Line 22 on the federal tax form as the basis for each filer's taxable income and that line is described in various IRS documents as a "net" income tax line, which Davis highlighted in his suit.The other suits included that point in their briefs against the Seattle City Council for its passage of a tax on individuals with income over $250,000 and joint-filing income of more than $500,000, They all indicate they want Judge Ruhl to merely rule that the city violated state law.But the attorneys, including two retired State Supreme Court justices, have been told by Judge Ruhl that they must be prepared to argue the constitutionality as well as the statutory issue, although he said at the Wednesday meeting with attorneys that he intends to rule first on the statutory question. What that would mean is the issue of whether the income tax violates what's known as the "Uniformity Clause," a constitutional requirement that all property be taxed equally, wouldn't come up if he rules against the city.

Thus the only way the issue of the Uniformity Clause would become part of the case is if he were to find the city income tax was legal.

Then attorneys for the three suits could use the Uniformity Clause as a backup issue and raise it for a discussion that would reach the high court.

The sense of those who want a state income tax is that a dramatically more liberal high court than the 1933 court that ruled that income was property and thus required to be taxed equally would throw out its own rules and reverse that decision, opting to throw out its own rules and eight decades of decisions by the high court supporting the 1933 decision.

The random selection of Ruhl to preside over the superior court deliberations on the case also has to be viewed as less than ideal for the city since he is considered by attorneys in this case as the best judge for them because his qualifications make it less likely he would be influenced by the political rhetoric surrounding this case. He is rated as "exceptionally well qualified" by various organizations, including the King County Bar Association.

Finally, Ruhl's decision to separate the statutory question of whether the city broke state law from the constitutional issue will make it more difficult for Seattle to get before the Supreme Court with the constitutional question.

"Uniformity" in this case means the city's imposition of no tax on income under $250,000 and 2.25 percent for income above that.

The concern of those who fear that it's risky to turn this into a political issue rather than a statutory one are concerned about statements like that from Matt McIlwain of Madrona Venture Partners that "In defeating the city income tax, we can help maintain a system of opportunity and job creation for innovators and workers."

In addition, the complaint from the Opportunity for All Coalition of which McIlwain is a spokesman goes to great length in its suit to provide anecdotes of people being taxed on selling their homes or their businesses who are not wealthy but merely average Seattle citizens who will be injured by the tax.

Those are all political considerations.

Davis' motion makes clear at the outset that he and Kunath don't view this as a political issue but a simple statutory question. The other suits appear tempted to want to make political statements with their suits.

A long line of decisions in the decades since that 1933 decision that income is property and thus a tax on it must thus meet the constitutional requirement that property has to be taxed equally have cited that decision to reverse ideas like calling an income tax an excise tax or imposing an income tax on real estate transactions.

And confronting those who hope the court will merely overturn that decision is the rule known as Constitutional avoidance, which says the court must make every effort to avoid interpreting the Constitution if it can deal with the statutes. But in the end, the high court can do whatever it wants.

The concern of those who don't want to tempt a Supreme Court likely to be sensitive to the views of those who want to repair an admittedly regressive tax structure with an income tax know the court will be searching for any argument that opens the door to consider the merits and wisdom of the tax.

Anyone who argues that the tax is unfair, unneeded or unreasonable is handing the Supreme Court exactly what it needs. And should the Supreme Court take up the issue and decide in favor of income-tax advocates, it's a good bet that soon thereafter, a legislature that now needs only a simple majority and no voter support because of Supreme Court action to throw out a decades-old precedent, will enact such a tax.

And history will honor or revile, depending on which segment of the population we are looking at, the organization or individual who made that come about.
Tweet
Tags:
Economic Development Mike Flynn Government business corporations issues Politics
Cellular icon Mikal Thomsen lives 'dream come true...
Fans of Jeremy Taiwo, Seattle Olympic decathlete, ...