For Jim Whittaker, memories of '68 campaign are of the 'might have been' 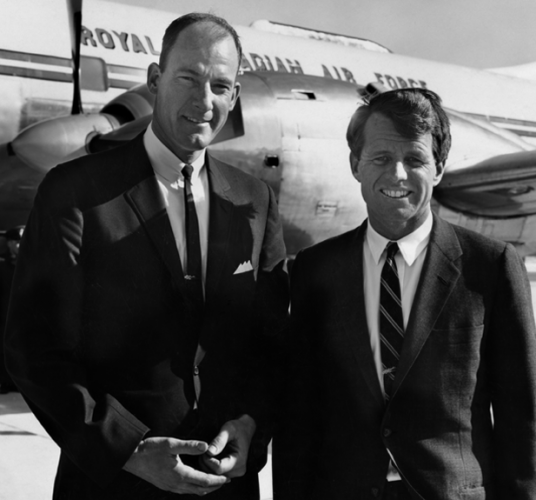 (Editor's note: This is the second of four profile article that I first published a decade ago on the 40th anniversary of the chaotic, impactful and tragic 1968 presidential campaign, relating the stories of four Washingtonians who were launched into national prominence with roles borne of that campaign. The articles are reprised now in Flynn's Harp both because it's the 10thanniversary of this column and the 50th of that fateful '68 campaign.)                 ---------------------- For Jim Whittaker, memories of '68 campaign are of "might have been"For Everest-conqueror Jim Whittaker, memories of the 1968 campaign are caught up in the might-have-been of Sen. Robert Kennedy's bright but brief campaign for the Democratic presidential nomination.It was in an interview in 2008, as I prepared to do a series of articles 40 years on from that tumultuous 1968 campaign, that Whittaker recalled how he first met the man whose presidential aspirations would involve Whittaker dramatically in a memorable political campaign."After President Kennedy was assassinated, Canada named its highest unclimbed mountain Mt. Kennedy," recalled Whittaker, who in 1963 was the first American to reach the top of Mount Everest. "So inevitably, I was asked if I'd climb it and I contacted National Geographic about supporting the climb and we began planning it.""Then I get a call asking if I'd be willing to take Senator Kennedy up," Whittaker said. "I called him and asked if he'd ever climbed, and he said he hadn't. I told him 'this is going to be tough. When I called him again a few weeks later, he said he was practicing by running up and down the stairs at his house crying 'help.'"I thought, 'my god, what have I gotten into," he added."But it turned out he was in excellent condition and on the way down, he ran a couple of the climbers on our team into the ground," Whittaker remembered. "That was the beginning of a strong friendship.""I was at his home when he decided to run for president," Whittaker recalled. "He irritated a lot of people by announcing."In fact, what happened is that Sen. Eugene McCarthy, a quixotic lawmaker who decided to run against a sitting president from his party because of his opposition to the Vietnam war, had attracted a mass of young people energized at the prospect of a candidate of change.McCarthy's campaign basically drove President Lyndon Johnson to announce he would not seek re-election, and that announcement opened the door for Kennedy, who never viewed McCarthy as an electable candidate.As Washington State political editor in Olympia for United Press International, I was assigned to help cover the 1968 Oregon primary, which was the first real face-to-face battle between McCarthy and Kennedy, I had the opportunity to meet Whittaker in a way he wouldn't remember. 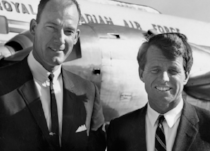 Whitaker and KennedyHere's that story: It turned out Kennedy lost the Oregon primary, the first ever loss by a Kennedy. I waited with Bob Clark of ABC news at the curb in front of the Benson Hotel in Portland for Kennedy's limousine to arrive. Behind us was a press of young Kennedy fans jockeying and shoving for the opportunity to see him, touch him, be near him when he arrived.The limousine pulled up, the doors opened and Whittaker led Kennedy from the car. The young Kennedyites shoved forward. The last I saw of Bob Clark, he basically disappeared under the feet of an out-of-control mob of Kennedy fans.I saw Whittaker and, as he passed, I grabbed hold of his belt and knew, since he was leading Kennedy into the hotel and was too big and athletic to go down, I was secure with his belt firmly in my hand.The lead on the UPI story that night was headlined: "Kennedy bushwhacked on the Oregon Trail." It turned out to be a prophetic headline.A week later, Kennedy won the California primary. Whittaker had a suite in the Olympic Hotel in downtown Seattle, to which he had invited Washington state's delegation to a wine and hors-d'oeuvres political romancing on Kennedy's behalf to watch the results of the California primary.Whittaker recalled that he had four speakers set up in the suite and that Kennedy's wife, Ethyl, called to say Kennedy wanted to talk to the Washington delegates."He thanked them for their participation and pitched for their votes, then he went down to give his acceptance speech," Whittaker recalled. "A little while later, as I was driving home and listening to the radio, I heard he had been shot. I turned around and went to the airport and when I got to the hospital, Ethyl and Teddy Kennedy asked me to go into the room with them and we said our goodbyes. Then he died."We flew back to Washington on Air Force One, which president Johnson extended to us," Whittaker remembered. "The funeral at St. Patrick's in New York was followed by the train ride back to Washington. The crowds along the tracks were incredible. Ethyl asked me to be one of the pallbearers, along with John Glenn, Robert McNamara and others I don't recall right now."I can't believe how long ago it's been," he said in that 2008 interview. "But it's as difficult to think about as if it were yesterday," Whittaker said.I asked Whittaker in that 2008 interview if he and Kennedy had every discussed a role Whittaker might play in a Kennedy administration and he said they hadn't."But in thinking about it later, there were times I thought I'd have made a hell of an interior secretary," he said with a chuckle.Whittaker's memories of that campaign, and of an incredible life of challenge and adventure, are chronicled in his book, "A Life on the Edge: Memoirs of Everest and Beyond."It was 22 years after Kennedy's assassination that Whittaker, in what he characterizes as one of his proudest moments, guided the 1990 International Peace Climb in which he helped put a Russian, a Chinese and an American together on the summit of the Everest.Whittaker, who turned 89 this month, lives in Port Townsend with his wife, Dianne Roberts, who is described with him in their website as "partners in marriage, life, business and adventure for more than 40 years."I asked Whittaker for this reprise column if he had any current reflections on that campaign and he emailed me: "If the President and Bobby had lived, this Planet would be more safe and clean for all living things."