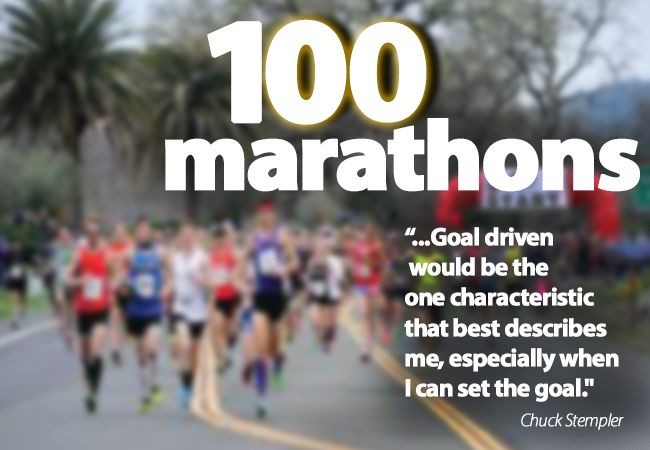 A conversation with Chuck Stempler might make an interviewer think that continuing to grow his prominent printing business is only a little more important than the marathon races that occupy a regular focus of attention.

In fact, Stempler is nearing milestones in both business and running. On March 1, he will log his 100th marathon when he competes in the Napa Valley Marathon.

And next year will mark the 20th anniversary of his ownership of the business that he bought in 2001 and has since built it into the world's largest AlphaGraphics franchise.

Chuck StemplerAs a senior sprinter, I am awed by seniors who run marathons so I was most intrigued by the attitude and focus that have brought him to the point of anticipating his 100th marathon.

So this column will be more about Stempler running the distance than about running his business, although he suggested in an interview that the two connect. What happens in that running provides "quality time to be alone with my thoughts and think through the issues and opportunities I face, both personally and professionally."

There are a number of articles that suggest that "those who do 100 marathons tend to be goal-driven, patient, resilient and social."

When I asked if those apply to him, Stempler said: "yes, that describes me except that I'm not particularly social. Goal-driven would be the one characteristic that best describes me, especially when I can set the goal."

And as he nears fulfilling his 100-marathon goal, one he has been pointing toward since he ran his first one in 2003, Stempler disclosed that he's already looking to completing another 100 of the 26.2-mile events. But he will increasingly be looking to fun places to run.

This will be the 17th time he has run the event in Napa, which Stempler says is his wife, Sally's, favorite place for him to run, adding that "we have rules that I run in places where we enjoy being."

The 61-year-old Stempler, whose wife is three years younger, says that in beginning to plot out the second 100 marathons, which he figures will take 'til he's 76, he'd like to "make more, bigger trips," as in his plan to run in Helsinki, Finland, in May.

When I asked Stempler to explain how he got into running, he said he began to focus on a higher quality of lifestyle "and running was a part of that," although his focus on running never involved setting a win or place goal.

As to the time he spends running, Stempler said he ran 2,300 miles last year, including seven marathons and eight half marathons, that "provide a foundation for my day, week, month and life."

A note on Stempler's business, since the way he runs it has generated substantial success.

And I saved for the close a comment he made as we were talking about why he is so taken with marathon running that I figured might also apply to the challenges of sustaining his business:

"I enjoy something that is really hard, that falls between pleasure and pain."

Tweet
Tags:
Mike Flynn people
Boeing board faces questions - What lies ahead? Ho...
Bud Krogh's lessons from the fall of a president