Inslee for Biden post? Chris Gregoire should get a close look 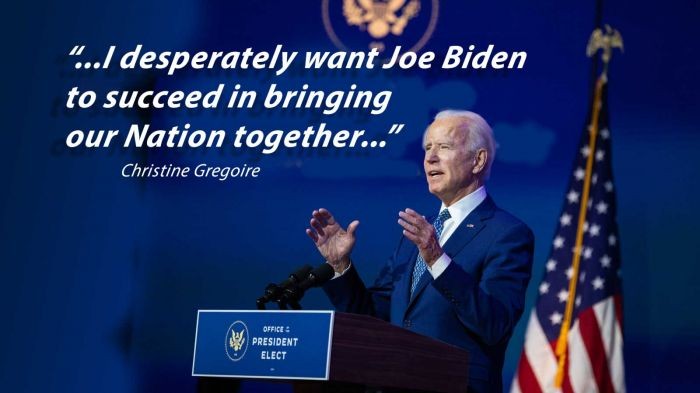 There has been plenty of conversation about the possibility of Washington Gov. Jay Inslee being tapped by President-elect Joe Biden for a cabinet role, but there may be an emerging realization that Inslee’s predecessor, Christine Gregoire, could be a major benefit to a Biden Administration.

I discovered, in searching among the articles on those under consideration for cabinet positions that, in fact, Gregoire had been included on a list of possible heads of the Environmental Protection Agency compiled by Forbes Magazine. Interestingly, Inslee was also on the magazine’s list of EPA possibles.

In planning to do this column, I first toyed with an imaginary quote from Inslee if approached about a cabinet role: “I really am grateful for the offer, but I honestly think I should be true to my promise that if re-elected, as I now have been, I would remain as Washington governor. But I really hope you would consider looking to my predecessor, Christine Gregoire, who would be superb in any of several positions in your administration.”

Of course, that was an imaginary quote. 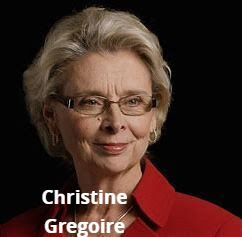 I emailed Gregoire last week that I was planning a column on why she should be named to the Biden team and she responded: “I’m not really seeking another job. Having said that I desperately want Joe Biden to succeed in bringing our Nation together and restoring our respect globally.”

The fact is Gregoire, in the eight years since she left office, has compiled a dossier of evidence that she would be a major asset to a Biden presidency, not the least of the reasons being her ability to work with top business leaders. That may be an elusive quality among those apparently on the list of candidates for various cabinet positions.

A case could be made for Gregoire as a candidate for attorney general, an elected office she held for 12 years in Washington, during which she guided the A.G.s of 46 states in creating the$206 billion legal victory called The Tobacco Master Settlement Agreement.

But more currently relevant, perhaps, is the national health crisis with COVID-19 that the nation is now enduring and seeking to fight back against, and the role she has played as CEO of Challenge Seattle in bringing the Seattle area’s biggest organizations to create a unified COVID response.
The manner in which she focused leaders of 19 of those organizations on the effort allowed Seattle to have what Forbes magazine described as “the world’s first operational trial site for a COVID-19 vaccine candidate.”

Gregoire was in regular contact with the top executives of a list of companies that included national names like Amazon, Microsoft, Costco, Nordstrom, Alaska Airlines, and Starbucks, sometimes many voices in the same conversation.

Gregoire, who had already built a relationship with health experts in the region as chair of the Fred Hutchinson Cancer Research Center before forming Challenge Seattle, demonstrated an ability to work with both business leaders and health leaders, which made it easier to bring the groups to work together.

Going back to her attorney general days and the legal battle with tobacco companies, Gregoire was called “tiger lady,” the tobacco slayer,” and “the woman who brought the cigarette industry to its knees" for her role in negotiating a $206 billion settlement between the tobacco industry and 46 states in 1998.

Matthew Myers, head of the Washington, D.C.-based Campaign for Tobacco-free Kids, said back then: "This is a case where Chris Gregoire was the most influential attorney general in the country in promoting the public-health provisions in the 1998 settlement."

Each state received millions of dollars a year under the Master Settlement Agreement and innovative use of the funds in this state, guided by Gregoire with the legislature, was created in 2005 of the Life Science Discovery Fund (LSDF). The fund was to foster the growth of Washington’s life science sector, particularly the funding of early-stage biotech companies and life science research.

But state budget needs over the years following, particularly the financial challenges in 2011 and thereafter, prompted lawmakers to begin to regularly divert more and more of the annual amount each year to General Fund needs.

The final blow came in 2015 when a Republican-controlled legislature decided to sweep a final $11 million from LSDF into the General Fund.

The long-forgotten ironic fact was that Inslee could have vetoed that provision from the final budget, but he had more important issues on his plate that he had negotiated in exchange for not vetoing. It occurred to me for a column at the time that Inslee had passed up the opportunity to save the last vestige of Gregoire’s life science plan for the state.

The role LSDF, and thus Gregoire's initiative, played in providing funds for life science startups was a key seed in the life science and biotech industry that has emerged in this region.

Of course, no one knows what reaction Gregoire would have if offered a post in a Biden Administration. She has a full-time job with Challenge Seattle, still on The Hutch executive committee, involved with the Ruckelshaus Center, has a family here including two daughters and grandkids, and shows no signs of slowing down at 73.
And losing her to a national role would be a major loss for this state., but for the good of a greater cause.

I think Gregoire could play an important role in achieving that, a role that I think will, unfortunately, elude too many of those whose names are being dropped in the hopper, including too many who are dropping their own names.
Tweet
Tags:
Mike Flynn
Lengthy effort to get documents in jobless-payment...
BYU star quarterback Zach Wilson's family as impor...