Kitty Kelley was a spunky young woman from Spokane for whom the 1968 presidential campaign was the launch pad for a highly successful but controversy-punctuated career as a biographer of the rich and famous.

In a very real sense, the then-26-year-old who had, by accident, become a highly visible figure in Sen. Eugene McCarthy's quixotic quest for the presidency, may have been one of the biggest winners of that campaign. 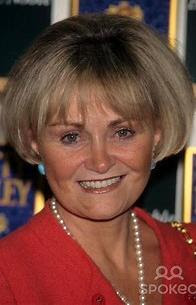 Kitty KelleyOne of my favorite memories of covering parts of that campaign of 50 years ago as a young political writer for United Press International was a chance encounter with her at the 1968 Democratic state convention in Tacoma, a decade on since we had become friends as high school students in Spokane.

I glanced across the crowded hall and, seeing her for the first time in 10 years, I made my way through the crowd, said hello and asked her what she was doing there.

"I'm Gene McCarthy's press secretary," she said with a laugh. McCarthy, of course, was the out-of-nowhere senator whose run for the presidency had energized the anti-war forces, particularly the young, who became a change-the-world political force that year.

"What the heck do you know about being a press secretary?" I asked.

"I decided I wanted to be one and did some research and found that two of the senators didn't have one," she responded. "So I picked McCarthy, made an appointment with him and told him I wanted to be his press secretary. He asked me 'what does a press secretary do?' and I told him we'd figure that out together. So I got the job."

Thus that campaign brought Kitty contact with political leaders as the campaign moved across the country and the contacts she made that spring and summer of '68 helped provide the exposure and experience that would allow her to launch her literary career.

I watched with interest and amusement in the years since then as her ability to uncover long-hidden secrets and get the "ungettable" story on those about whom she produced a string of unauthorized biographies stirred the ire and criticism of the rich and famous and their friends.

She described her reporting style as "moving an icon out of the moonlight and into the sunlight." But those she wrote about often didn't care for the sunlight on their privacy.

And because she was an attractive blond woman with the nickname "Kitty," those stung by her tell-all biographies of Jackie Onassis Kennedy, Frank Sinatra, Nancy Reagan, the British Royal Family and Oprah Winfrey, as well as other journalists, found it easy to dismiss the quality of her work.

What may have been the high point of her controversial career came just prior to the 2004 presidential election when her look at the personal and business lives of a sitting president and his family was published.

"The Family: The Real Story of the Bush Dynasty," was the target of a full-court press from the Republican Party, including a GOP memorandum to radio talk show hosts that denounced the book as "New Kelley Book, Same Old Slime." The fact that she was a Liberal made the denunciation from the talk-show hosts even easier. The book was ranked Number 1 on Amazon.com as it was released.

Over the years, when controversy swirled around her work, I've smiled to myself to think back on that encounter in Tacoma with a young woman I'd known as a Spokane teenager who had used brains and guts as substitutes for experience and privilege to carve out a high-visibility career for herself.

She thus exemplified a fast-growing group of young women who did likewise in the late '60s and early '70s, creating important roles for themselves in what had been, prior to that, a "man's world," and opening the way for others of their gender to do the same.
Tweet
Tags:
Mike Flynn Government people Politics
Shabana Khan shifts focus: Creating a western-tour...
Egil Krogh's lessons from the fall of a President ...