Mrs. Washington has an agenda for mothers and challenged kids 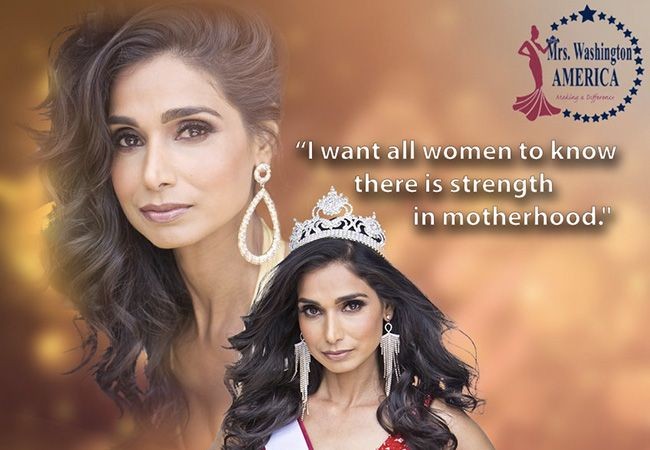 Neelam Chahlia's path to her selection as Mrs. Washington America began with a pregnancy crisis when doctors said her unborn son had a hole in his heart and advised that she terminate the pregnancy. Her husband told her she should listen to what the doctors said, to which she replied: "No, I am listening to what my heart says."She not only carried her son, Dax, now a healthy youngster who turns 4 next week and has begun to play soccer, to full term but was moved to launch a group aimed at helping other mothers to recover both physically and emotionally from the stresses of pregnancy.

Neelam Chahlia
Mrs. WashingtonFor Chahlia, who was born and raised in a small town in India and educated there through her master's degree and Ph.D., the experience of pregnancy that by the third trimester had her bedridden and virtually unable to walk caused her to be determined to recover and become "the best version of myself."And she says that her recovery process "awakened a passion in me to help other mothers. I want all women to know there is strength in motherhood."It was that conviction and learning that Mrs. Washington could provide a platform for her, that prompted her to enter the pageant, although knowing that no first-time entrant had ever won.   "I was sending my resume to almost everyone in hopes of getting back to work," she explained. "One of my former co-workers and a good friend suggested joining the Mrs. Washington America organization, where I could make more connections, improve communication skills as well as continue with my community work.""So, once my son joined preschool, I decided to apply for Mrs. Washington America," she said.But the 39-year-old mother of two (her daughter, Zoey, is 8) did win the title in Olympia in June and is now preparing for the Mrs. America 2020 pageant in Las Vegas later in August.As Mrs. Washington, Chahlia says she wants to raise awareness about drug abuse among young people through the Victoria Siegel Foundation and save children's lives through UNICEF in addition to her focus on aiding women recovering from problem pregnancies.Chahlia came to the U.S. in 2008 after getting her Master's in zoology with a focus on human genetics and her doctorate in biological sciences and became a citizen three years ago.She says she worked hard to become a scientist and an engineer but never dreamed of being a beauty queen.  Although she says "it's not really a beauty pageant since the mission of Mrs. America is making a difference," as in she now gets to go around the state to talk about my issues." But she explains she is seeking to raise money because candidates who raise the most are automatically moved to the semi-finals. Her goal is $20,000 and has gained $3,400, including a sponsorship from the Pro Sports Club in Redmond.But Chahlia is waging another campaign in addition to her one on behalf of mothers coming back from difficult pregnancies.Chahlia, who says she has been trying for nearly a year to return to work, says she understands the challenges faced by working women in getting back to work after pregnancy or other personal needs. So she wants to work with the major corporations in Washington to establish strong returnship programs.  She is seeking to help create a "returnship program," noting that"It is exceptionally hard for women to get back into the workforce after taking time off to care for a sick child or an aging parent," she said. "Instead of getting rewarded for their sacrifice, they are penalized for helping the ones in need."   So she says she is working with state Sen. Manka Dhingra.on a tax incentive bill for corporations that provide returnship programs.