May 24 Posted by Mike Flynn in Flynn's Harp 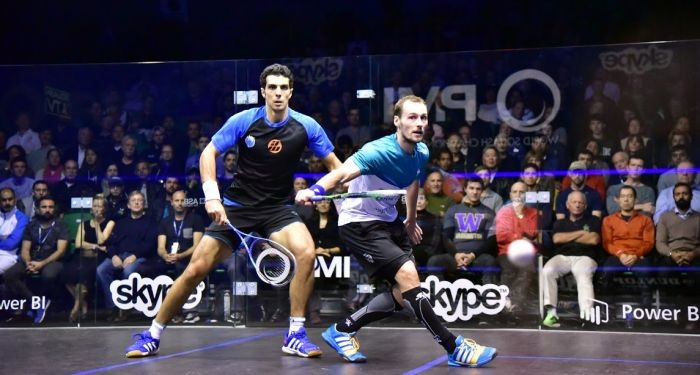 Bellevue's role as a growing center for the sport of squash was enhanced last weekend as the quest of the best players in the world for a share of the most lucrative 16-man squash tournament purse ever had the attention of the squash-world, but with unfortunately little local attention or support.

Frenchman Gregory Gaultier, currently World Number 1 in the sport, won the title and accompanying $25,000, defeating Egyptian Ali Farag in a tournament that added to the image of Shabana Khan as one of the sport's emerging star promoters. Her YSK Events put on the tournament. 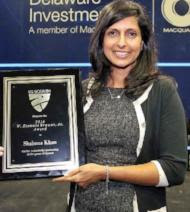 With $150,000 in prize money on the table, the PMI Bellevue Squash Classic was appropriately staged as a sort of coming-out party for the Boys & Girls Club Hidden Valley Field House just north of Downtown Bellevue.

When she put on the Men's World Squash Championship in late 2015, first time ever for the event on U.S. soil, Shabana charted new territory for prize money, which totaled $325,000 for the event that was held at Bellevue's Meydenbauer Center. That amount became the threshold going forward with the U.S. Open in Philadelphia next fall boasting a $350,000 purse.

I was struck by the fact that when you watch the speed, agility and athleticism of the top squash ccompetitor and reflect on the comparative talents needed for other racket sports, it's hard not to ask "why is tennis played everywhere and squash isn't?"

I posed that question to Shabana's older brother, Azam, four times a member of the U.S. Open team, and he said: "Tennis courts are everywhere and available to all while squash courts are in clubs and available only to the elite, but we intend to change that and it's one of Shabana's goals."

In fact, statistics on the sport indicate it is growing faster in this country than anywhere in the world, with the U.K. and Egypt following close behind.

For those on hand for the 2015 Men's World Championships, there was a bit of déjà vu since Gaultier defeated an Egyptian in that year's final to win his first World title after losing the in the final match three previous years.

Only a few in the inner circle of those helping Shabana with the event were aware that had it not been for the assist from Robert Greczanik, whom Asam Khan describes as "specializing in restoring injured athletes to full enhanced function," to help overcome an ankle injury that Gaultier feared would keep him out of the finals.

As an aside, Gaultier had turned to Greczanik, who runs Energetic Sports Lab in Bellevue, prior to the 2015 finals to address the fact he simply felt "all beat up with numerous injuries."

Squash players from around the world who were on hand for both events praised the Boys & Girls Club as far more appealing for players and fans, particularly for the interaction between them, than Meydenbauer, which incidentally had rejected her effort to hold this year's event there, telling her to look elsewhere.

And the community supporters of the Hidden Valley club must have been pleased to see its visibility on the global squash stage with thousands subscribing to the television coverage.

Players from 17 nations were on hand, but Shabana made it 18, using what's called a "wild card" for promoters of squash events, to let a young player from Connecticut compete to make sure the U.S. was represented.

Leading the as-yet small group of believers in what Shabana's squash initiatives are intended to mean for the Bellevue community's image and the opportunity she seeks to bring to the city's and region's young people was Dave Cutler. He is not only universally acclaimed as the key technical brain behind the Microsoft Windows NT and all the subsequent windows versions. A decade ago he was recognized as a National Medal of Technology and Innovation laureate, perhaps the most prestigious honor in the country for developers of new technology.

His support, and the fact that dozens, if not hundreds, of Microsofties who cross the street from the company's Redmond campus to play at the Pro Sports Club where Shabana, Asam and Latasha are instructors helped guide Microsoft into the Presenting sponsorship with Pro Sports as the Official sponsor.

Pacific Market International, a Seattle-based brand and product-marketing company with offices in seven cities around the world, has been a strong supporter of both this five-day event and of the 2015 Men's Championship as title sponsor.

Richard and Jackie Lange, Woodinville residents, stepped up as a family after Shabana created a national tournament for young squash players called the National Gold Tournament that attracted 175 young people from around the country to compete in groups broken down as under 11, 13, 15, 17 and 19. Shabana notes that 20 college coaches looked on for the older players' matches at the event held earlier this spring, also at the Boys & Girls Club.

The Langes, whose daughter, Kristin, played squash at Penn and was a three-time intercollegiate finalist, put up the money for five years of having the youth competition be "The Lange Showcase," sharing Shabana's vision of making squash available to young people of all ages and means.

Khan is the most famous last name in squash. Distant cousins Hasim and his son Sharif, and cousin Jahangir, dominated world squash for decades.

Yusuf Khan 10-time all-India champion, emigrated to the U.S. in 1968 to teach tennis at the Seattle Tennis Club, bringing with him his family that then included children Asam and Shabana. Khan soon after arrival in Seattle created the Seattle Athletic Club and made it a focal point for squash in Seattle.

Shabana's younger sister, Latasha, was several time national women's champion before losing the title to Shabana, providing me the opportunity to joke in an earlier column, "best in the family is best in the county."

The looming reality for this unique local event is that Shabana and her supporting family have basically given themselves only a couple of months to decide whether it's worth the struggle (the event basically broke even this year) to attract thus-far absent support from either the City of Bellevue or local businesses.