A LinkedIn entry from my son, Michael, noting the 20th anniversary of the launch of eastside business journal brought back memories of the effort to create the "local" business voice for Bellevue and other Eastside communities as they were starting to emerge as economic entities more independent from Seattle. 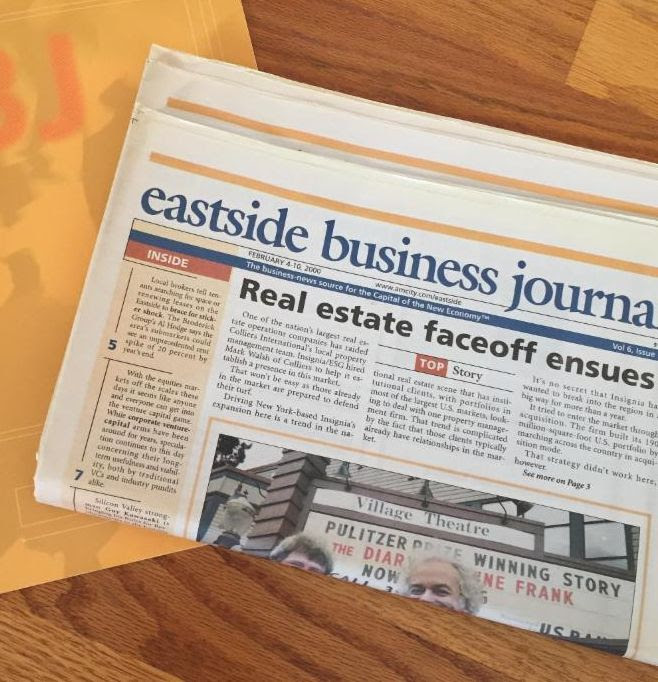 Eastside Business JournalMy decision, as publisher of Puget Sound Business Journal, to create a separate weekly business publication with its own staff, readership and highly focused coverage of business on the Eastside, as well as involvement with its business community, was a realization that a Seattle-based and focused publication couldn't build close relationships east of the lake.Michael was an experienced young public relations and marketing professional when I convinced him to leave the public relations firm, The Fearey Group, to become general manager and overseer of a weekly start-up business newspaper.  Microsoft was already more than a decade along in turning out young millionaires with its stock, as well as new software and computer products from its Eastside headquarters, and in fact, that year spun out its Expedia division into a separate Bellevue-based public company.And the Eastside had become the global mecca for the rapidly growing telecom and cellular industry as home to not just McCaw Cellular and Nextel but also Western Wireless, which in 1999 spun off its star telecom subsidiary, VoiceStream, which has since become T-Mobile.Willows Road, along with the west side of the Redmond Valley, had actually become the region's high-tech highway more than a decade earlier with a number of companies like Physio-Control and Rocket Research building their headquarters along the west hillside above Willows Road.And of course, Kemper Freeman had already, for a couple of decades, been scaling the retailers' mountain and reigned as the most prominent retailer developer in the region.  By 1999 he was on the way to creating a retailing center that would make his Bellevue Collection of Hotels, retailers, and restaurants leap past Seattle as a destination for shoppers and diners.Of course, the EBJ launch came two years after Amazon's IPO changed the nature of Seattle's ability to compete with the tech growth on the Eastside, and soon surpass all in growth of revenue, profits and employment. Of course, now Amazon seems intent on possibly turning the Eastside into a second headquarters now that New York has been jettisoned.Thus 1999 was an interesting time to seek to create a successful and impactful special-interest (business) publication in Bellevue and the Eastside, a time when two Seattle daily newspapers, The Times and Seattle P-I, made life difficult for the much smaller and profit-stretched Eastside Journal in the quest for readers and dollars from the Eastside.So I told Michael to come up with some events that EBJ could put on to attract visibility and support and promised to make sure PSBJ didn't do the events as a counter to keep EBJ from gaining a foothold, which interestingly PSBJ adverting and editorial leadership hoped to do. It was a competitor, after all.  Thus I took the unusual business role of holding the big dog back so the puppy had a chance to grow.For a newly minted young newspaper executive with a twenty-something staff and seeking to carve out readers and advertisers from a young, partly tech, audience, the logical event for Michael to create was one honoring youth.So he launched Eastside 40-Under-40, geographically designated even though there was no other 40-Under-40 event in the Northwest. In fact, I don't think there was one on the West Coast at that time.That eventually became the regional event run by PSBJ, with the "Eastside" dropped from the 40-Under-40 name.One day in summer of 1999, I wandered over to Bellevue from my PSBJ office to check in and found folks on the staff en route to a day-long Going Public seminar that attracted a large audience of entrepreneurs, prospective investors and wealth managers to listen and learn from a panel of experts Michael had assembled.Then Michael came up with a CEO interview breakfast event he dubbed Eastside Executive Forum, with his first interviewee being the region's then Beer Master, Paul Shipman, creator of Redhook.Another CEO interview featured HomeGrocer.com CEO, Terry Drayton. Do you remember that Bellevue based company that sprang into existence with the first fully integrated Internet grocery that grew across the West and across the south before being forced by tight cash for growth to sell out in the fall of 2000 to competitor Webvan?It wasn't long before the reality of having created a direct and growing competitor in basically the same market began to sink in for the parent company and EBJ and its staff were folded into PSBJ. Michael soon departed the media business to focus on a business-development career in other industries.And with the demise of the P-I and the closing of the Eastside's daily newspaper, by then renamed the King County Journal, in 2006, and the recent dramatic cutbacks by profit-focused Sound Publishing as owner of the area's shrinking pool of weekly newspapers, memories of the local business newspaper that was have been stirred anew."A lifetime ago and yet there isn't a day I'm not reminded of something I learned in those years," Michael wrote in his LinkedIn message. "Thanks, Pop and EBJ Peeps."The LinkedIn message got several thousand views and many comments, including this from the head of an Eastside wealth management firm."Michael: you and your team's work had a huge impact on the Eastside at a critical juncture of growth along every path - business, economic, community, stature, maturity, and poise. I miss the voice of EBJ. I relish my fond memories of all of your events and the friendships forged over robust dialogue."

Neeleman's books on Brazil point up importance of two-nations' ties