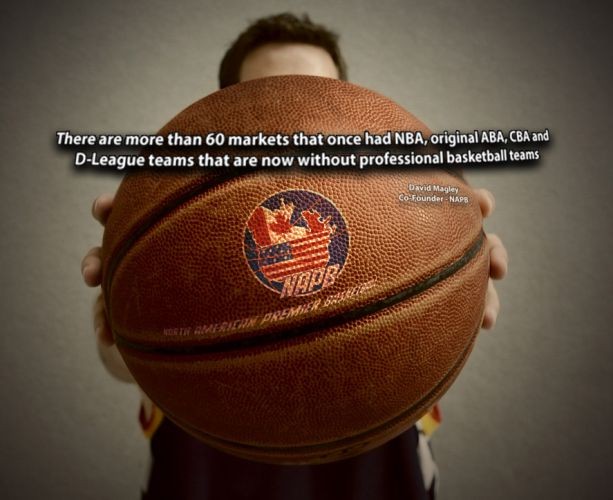 Seattle fans hungry for a men's professional basketball team to root for apparently will have an opportunity to do that this coming season, but it won't be an NBA team that is seeking their support and affection.

David MagleyRather it would be a Seattle team, without a nickname as yet and under a group of Toronto owners, that will compete in the new North American Premier Basketball (NAPB) league that was unveiled July 5 at a Chicago news conference. The Toronto owners are expected to be open to finding local partners.And in fact, according to David Magley, who is president and COO of the new league that he says is tobeginplay January 1 with about a dozen teams from the U.S. and Canada, there could soon be teams from other Washington State cities, with Spokane, Yakima, Bellingham and Tacoma on his list of possibles.When the formation of the league was announced at the Chicago news conference, Dr. Sev Hrywnak, who owns several surgical centers in the Chicago area and is Magley's co-founder and CEO of NAPB, said the league will operate from coast to coast in the United States and in Western Canada. It will have combine tryouts this fall in 15 cities, with Seattle tryouts on September.Those tryouts of pro hopefuls, many bringing college-play and some professional backgrounds, will thus produce the 12-man roster of the Seattle team, as well as any other Northwest teams that emerge.Magley, who hails from Indiana and played his college ball at the University of Kansas, and has been commissioner of the National Basketball League of Canada, was in Seattle this week where I caught up with him for a conversation about the return of men's pro basketball to Seattle.Prior to taking the reins of the Canadian pro basketball league, Magley was general manager of the Brampton professional team, where one of his players was Jordan Hamilton, a Seattle Prep star who went on to Lehigh University where his team earned basketball fame for its upset of Duke in the 2012 NCAA tournament.Magley said he expects that the 27-year-old Hamilton, who played professionally in Germany and Luxemburg, would be a player as well as business manager of the Seattle team.According to Hrywnak and Magley, the now defunct Continental Basketball Association, the demise of the ABA and the effort to move NBA's G-League teams closer to their parent teams leave markets across the U.S. abandoned. A marketing study conducted over a 2-year period identified 60 cities in the USA and Canada that have the fan support and financially stable potential ownership groups to sustain professional basketball in each of those areas."There are more than 60 markets that once had NBA, original ABA, CBA and D-League teams that are now without professional basketball teams," Magley said. "Then there are places like Spokane and Boise that have never had professional basketball but represent appealing markets to us."In talking about the potential of Spokane, as an example, Magley said: "Do you think the owner of a franchise there that had signed half a dozen former Gonzaga U stars and several from Washington State who were still interested in playing basketball would attract fans to see the games? Who could doubt that would successful."Criteria for owners is a net worth of $2.5 million, he said, but that would be the group financial qualification in a case where four or five partners might want to be involved.The franchise fee would be $200,000, but Magley suggested during our interview that in five years that value would likely be closer to $1 million."Its important to understand that most franchises will take an average of three years to reach breakeven," he added.Payroll for each team would be about $125,000 to $150,000 with three levels of monthly player salaries, $1,500, $3,000 and $5,000, he said. "Other costs, such as players' housing and travel, would be about the same."The NAPB will enlist former NBA Director of Officials Ronnie Nunn to serve as VP of Officials to, as Hrywnak put it, "set high standards for league referees." Nunn has flown around the world to speak to leagues in Europe and Asia about officiating, training, and league regulations.Magley's vision is that the teams would become closely involved with their communities, noting "we can do things with the players and inner-city kids, summer camps or give tickets to and working with local schools."Turned out that Magley headed for Yakima after our Seattle visit this week where, among other meetings, he sat down with Yakima businessman Bob Hall, who had put together a local group to purchase the city's CBA team, the Sun Kings, to keep the team's then distant owners from moving to New Orleans, which had lost its NBA franchise.Hall told me after the meeting that Yakima, whose Sun Kings had been the first team in CBA history to show a profit and won four CBA championships, "could definitely support an NAPB franchise but successful requires local ownership that has its boots on the ground and that reaches out to the community to build relationships."Reflecting on his own career, Magley told me: "I lived a Walter Mitty life, growing up in a small town in Indiana, playing for a great college basketball team, getting a chance to play briefly for the Cleveland Cavaliers, then playing in Spain and Belgium."
Tweet
Tags:
Mike Flynn David Magley North American Premier Basketball league Dr. Seve Hrywnak Yakima Sun Kings Gonzaga Jordan Hamilton
Many will be sharing memories of Costco's Jeff Bro...
Effort to fund endowed chair for Dr Paul Lange, pr...