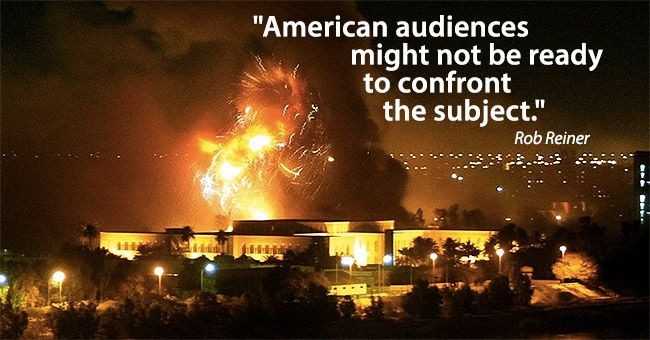 There is an increasing sense that this country's population has come to be divided between those who think the term "fake news" describes the offerings of conventional media and those who are convinced the phrase best describes certain well-publicized tweets and texts.So it's perhaps appropriate that a gradually increasing attention is being focused on a movie about four professional journalists who were certain, in the face of all the forces arrayed against them, that the then-president and his administration had concocted a "fake news" tale to justify a war in Iraq.

Joe GallowayThe movie is Shock and Awe, the title drawn from the campaign of that name created by the leaders of the administration of George W. Bush in preparation for the invasion of Iraq in 2003, a preparation built on the premise that Saddam Hussein had stockpiled weapons of mass destruction. Of course, the term "fake news" wasn't part our culture then, especially being applied to a president.The movie, conceived and directed by Rob Reiner, has been described as "the politically charged story" about the four reporters from the Washington, D.C., bureau of the Knight-Ridder newspaper chain who first looked into the Bush Administration's attempts to tie Saddam Hussein to the 9-11 terror attack. Thereafter their stories followed a theme that the allegations of WMD's were intentionally inaccurate.One of the four was iconic Vietnam correspondent Joseph L. Galloway, then more than 35 years into his career covering wars and those who fight them and thus the voice of experience that the two youngest reporters turned to for help in finding their way through the fabrications formed to keep the nation focused on the need for war with Iraq.It is because of my friendship with Galloway, both of us alums of the news service UPI, and because many in the Seattle area came to know him during his two visits to do Vietnam veterans interviews and several interviews he and I did, including the Seattle Rotary, that I decided to do a Harp about the movie. Regular readers of the Harp will recall that Joe Galloway has been the subject of a half-dozen Harps in recent years (Google Flynn's Harp: Joe Galloway).Eventually, the four including Knight-Ridder bureau chief John Walcott, played by Reiner himself, came to be described as "the only ones who got it right," but before that, they had to weather immense pressure and scorn, not only from the White House but also from some editors of their own newspapers.For example, there is the story of the editor of the Philadelphia Inquirer saying bluntly that the tone of their stories doesn't "fit in." And Galloway recalled "There is a scene in the movie where Walcott confronts the Philadelphia editor for choosing to run New York Times b.s. over our story. He tells the editor 'will you be running the Times correction and apology when that comes out?'"There is a perhaps ironic juxtaposition of the timing of the release of the critically acclaimed The Post, whose storyline about the Washington Post's publisher, Kathrine Graham deciding to confront the Nixon White House by publishing the Pentagon Papers, and Shock and Awe detailing a confrontation with a different president and more recent time.In fact, Reiner, who says he wanted to make this film for a long time, suggests that the struggle he had to secure U.S. distribution for the movie might relate to his belief that "American audiences might not be ready to confront the subject."I didn't think anybody in America could stomach it," Reiner said. "I don't think they can stomach it now, to be honest with you."

The start of the Iraq War in March of 2003, and how its continuation has unfolded in the years since then, may be viewed as too near to current political realities for a close scrutiny of the legitimacy the Bush Administration's campaign to go to war. In fact, the allegation that the WMD case built by key members of the Bush team was fabricated still draws outrage from some conservatives.

In fact, Reiner's LBJ screenwriter, Joey Hartstone, also wrote Shock and Awe, and actor Woody Harrelson, who played LBJ. Plays one of the reporters in Shock and Awe.

The fact Reiner was greeted with two separate standing ovations last September at the Zurich International Film Festival for the world premiere of Shock and Awe may have contributed to the firming up of presentation in this country.

It will premiere June 14 in Los Angeles, followed by an exclusive 30-day DIRECT TV deal, then on July 17, it will begin showing in theaters nationwide for two or three weeks.

It will be the second time that Galloway will have the opportunity to watch an actor on the screen playing him, Tommy Lee Jones in this case.

The movie We Were Soldiers, which was released ironically in the year prior to the Iraq invasion, was the film version of Galloway's We Were Soldiers Once...and Young, which detailed the battle of Ia Drang, in which Galloway swapped his camera for a machine gun and was immersed in the first battle between U.S. forces and North Vietnam regulars. He also was decorated for heroism for rescuing two wounded soldiers while under intense enemy fire.

Galloway was played by Barry Pepper in the movie in which Mel Gibson played Lt. Col. Hal Moore, who commanded the U. S. units at the battle and became Galloway's co-author of two books on that fateful battle and closest friend.
Tweet
Tags:
Mike Flynn Government people issues Politics
My first UPI boss and mentor honored by WSU's Murr...
Shabana Khan shifts focus: Creating a western-tour...