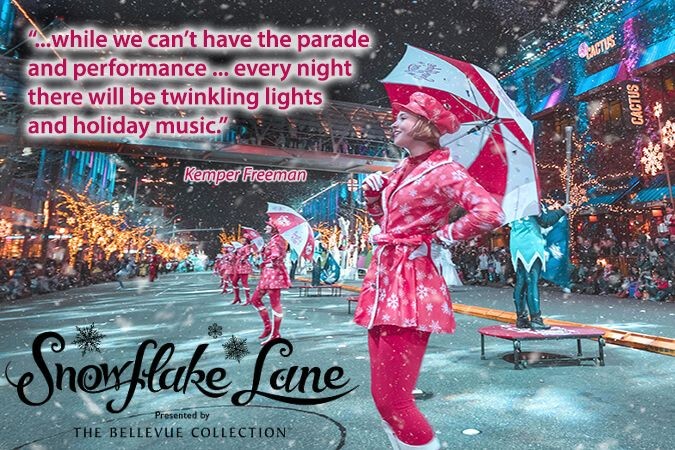 Bellevue developer Kemper Freeman Jr. is seeking to cap a year of COVID tragedy and accompanying economic devastation with a memorable Holiday Season event to set the stage for the 75th anniversary of his Bellevue Square Mall.

It was clear that in this virus-impacted Holiday season Snowflake Lane, which annually has turned downtown Bellevue into a month-long enchanted scene, had to be reimagined if it was to be held at all in 2020.

“I thought about not doing it this year,” said Freeman, the Bellevue developer whose Bellevue Collection of retailers, restaurants, and hotels forms the core of Downtown Bellevue.

Kemper Freeman“But with all things that have fouled up people’s lives this year, we didn’t think it would be right to also take away something as symbolically important as Snowflake Lane,” he added. “So while we can’t have the parade and performance with dancers and drummers, every night there will be twinkling lights and holiday music.”

“And while we can’t do Santa,’ Freeman noted, “we have the best display of Christmas lights ever in our 14 years, stretching a mile all around Bellevue Square.
Freeman’s pleasure with the holiday display is clearly a way for him to close a disastrous year of the pandemic as well as economic distress it caused and that likely played a role in the social unrest that occurred.

All had a dramatic impact on his business and his city, particularly the severe damage suffered by many of the mall’s retailers at the hands of rioters who embedded in the ranks of peaceful protesters then hurried away from the crowds to break into the mall.

It was at a cost that he hasn’t yet fully calculated that he helped restore the retail life of the 230 merchants and shops in the mall.

Now Freeman is looking forward to the year of celebration for Bellevue Square, launched 75 years and two generations ago by Freeman’s grandfather, Miller Freeman, and father Kemper Sr.

Plans for the 75th-anniversary celebration are just being finalized by his staff, Freeman said.

Freeman, now 79, chuckled as he shared the story of how his grandfather stirred comments across the business community, which labeled as “Freeman’s Folly” his decision to buy 10 acres in 1944 for $40,000, land that became the start of Bellevue Square. Two years later he assisted his son, Kemper Sr., to launch the shopping center.

Now in addition to an upbeat focus on 2021 for the 75th, Freeman is also welcoming the renaissance of the campaign to raise the funds necessary to complete the Performing Arts Center Eastside (PACE), a campaign that has basically been in limbo for the past year and a half.

Cathi Hatch, the Vice-Chair of the PACE board and leader of the fundraising effort, noted that what was once planned as a $200 million facility to fulfill the arts and cultural needs of the Eastside has gone up substantially in cost but the final figures aren’t complete.

But she did note that a search for major naming rights will be underway in full in the new year. The center has been part of Freeman’s vision since he and his wife, Betty, donated the land on the northeast corner of Bellevue downtown’s central core, on the same block as the Bellevue Hyatt.

Completion of PACE after fundraising is finished, will be several years further out.
Tweet
Tags:
Mike Flynn Economic Development business corporations people
The saving of NatureBridge was one of the hero sto...
Lengthy effort to get documents in jobless-payment...