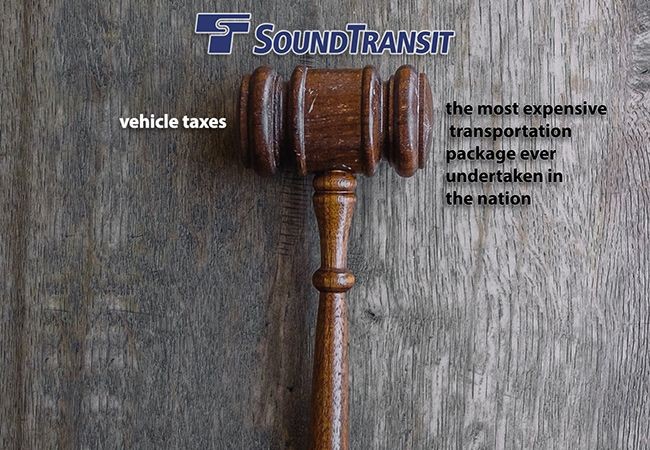 The fact the State Supreme Court will hear arguments next Tuesday on the legality of how Sound Transit is imposing the vehicle taxes necessary to pay for its light rail system is sure to reignite some of the arguments about the most expensive transportation package ever undertaken in the nation.Specifically, the issue before the nine justices will be Sound Transit's use, commencing mere months after voters in three counties approved the measure known as ST3, of a formula that inflates the value of vehicles on which the annual motor vehicle, or car-tab, tax is levied.  The case before the high court is an appeal of a ruling by a Pierce County superior court judge who quickly dismissed a class-action lawsuit that contended the law authorizing those taxes was unconstitutional. The rapid ruling by Judge Kathryn Nelson, who basically said she wasn't qualified to decide the issue, meant Sound Transit could continue to collect the car-tab as it has been doing since early 2017.Indeed, in addition to providing a renewed interest on the part of both supporters and opponents in replaying the arguments over the ballot measure, the high court's handling of the arguments and its eventual decision on the Pierce County case may provide some interest for court watchers. But more on that later.For opponents of the 2016 ballot measure, the initial flap in early 2017 over the unexpected leap in car-tab (MVET) tax for motorists to renew their vehicle licenses was an I-told-you-so moment. Opponents viewed it as epitomizing the arrogance of the unelected Sound Transit board that opponents had been trying point out.Car-tab taxes are the agency's second-largest source of revenue to pay for the massive expansion of bus and light-rail service the voters approved.The first broad perception of Sound Transit arrogance surfaced with the outcry from motor vehicle owners, pro light rail or not, irate about the increase in the cost of renewing vehicle licenses after the excise tax had climbed dramatically, due in part to the vehicle valuation chart used by Sound Transit.The agency uses an outdated formula, inherited from the Legislature, to estimate a car's value for the purposes of collecting taxes. The unexpectedly higher car-tab fees result from the formula that inflates newer cars' values, relative to Kelley Blue Book values.The Legislature has repeatedly failed to pass bills that would correct the formula because while support for such legislation has been bipartisan, it has not been sufficient to approach a majority.In fact, the outcry over the inflated MVET fee has also echoed into the legislative halls with a proposal that Sound Transit's governing body should be elected, instead of being officials elected to various local offices and then appointed to the board.The goal of legislation that passed the State Senate, then controlled by Republicans, but got nowhere in the Democrat-controlled House, would have been to replace the 18 Sound Transit board members with 11 directors directly elected by voters in districts that would have been created by the legislature.Sound Transit's media relations person explained that part of the reason for the large jump in MVET fees was that, in approving the $54 billion ST-3, voters said ok to a major increase in vehicle excise tax.  The outcry would suggest that many voters weren't really aware of that.The Sound Transit public relations representative had been quoted earlier, as the MVET flap emerged, to the extent that Sound Transit could have used a vehicle depreciation schedule that would have meant a less expensive renewal fee but chose not to "for simplicity sake," to bring transportation relief quicker.Now back to the point of legal minds and those interested in how courts make decisions will likely be watching as the process unfolds in this case over the coming months leading to release of the court's decision.What could be a backdrop issue here is the difference between the merits of the argument by the plaintiffs seeking to reverse the Pierce County judge's ruling and the perceived "public good" of a $54 billion regional transportation plan that impacts the revenue of hundreds of companies and thousands of jobs.Whether something is good or bad policy has frequently been a consideration at the U.S. Supreme Court level but state supreme courts usually seek to avoid going into the "public good" issue and instead stick to interpreting the law in the case before them.But judges on this state's high court, being human and subject to political and social tugs, could find themselves tempted not to overthrow the funding device without which Sound Transit's transportation master plan would be thrown asunder.So while I don't advise attorneys how to practice law, I have to think it would be a missed opportunity to fail to suggest, for the judges' inclusion in their thought process, that if voters three years ago felt the plan was good public policy, the outcry over the tax to pay for it could suggest a different public attitude. And add to that the fact that it's now pretty likely that alternative vehicles added to the transportation equation could render a rail-based system obsolete years before it's due for completion.