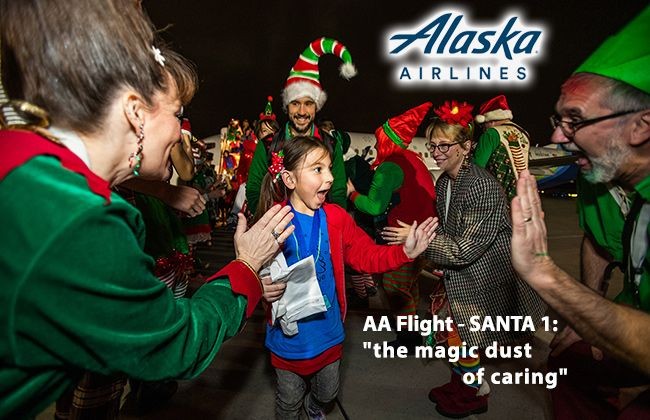 From the young boy who told his elf "thank you for making this the best day of my life" to the surprise 70th birthday party for Mrs. Clause, this year's Alaska Airlines' "Fantasy Flight" carrying 64 needy kids and their elves to the North Pole from Spokane International Airport brought abundant tears and joy.

This story of love and compassion has been Alaska's annual holiday gift to not just the greater Spokane community but also to its employees and to those who, in learning of it, get to share vicariously some of what I've come to refer to as "the magic dust of caring" that's sprinkled on all those involved. This year the volunteers included 15Alaska employees from not just Seattle and Spokane but from far corners or the airline's system.

This "Fantasy Flight" to the North Pole, always known as Santa 1 as it takes wing carrying orphans and foster children ages 4 to 10 from Spokane and Coeur d'Alene, chosen by social service agencies, has been an annual event in Spokane, with sadly only occasional visibility from regular media, for 23 years.

But the real magic didn't appear until Alaska got involved in 2008 at the request of Steve Paul, now president and CEO of the non-profit Northwest North Pole Adventures (NNPA), and in his 20th year as a volunteer.

United had carried out the holiday event for a number of years but merely taxied the plane around the airport before stopping in front of a north-pole bedecked hanger on the other side of the airport for a party with Santa. But when Paul, then a traveling tech exec and now a senior IT project manager at Spokane energy management company Engie Insight, approached Alaska about replacing United, he asked why the plane couldn't take off and fly around for a bit before arriving at Santa's home. And so it happened.

And every year since. So last Saturday evening the kids and their personally selected elves hurried aboard an Alaska 737-900 for a 20-minute flight to visit Santa and Mrs. Clause at their North Pole home.

Paul, who is Elf Bernie when he puts on his costume including red top hat, said there were some changes this year, with a new, more expansive hanger arranged for to provide a North Pole Santa's home with more space for volunteers, and a new Santa, the first change in the jolly old man in a number of years.

Paul is a senior IT Project Manager at Engje Insight, an energy management company rebranded a couple of years ago from Ecova, who spends much of the year preparing for the flight, working with agencies that select the children, gathering sponsors and overseeing details like elf selection.

When I asked Paul prior to last year's column about his elf age, given that he was 43 in people years when he first got involved in 2000, he said his elf age is 907 years, adding that is really only middle age for elves so he still has a ways to go. And he leaves no sign of slowing down.

A key part of the event magic in recent years has been Alaska pilot Eric Hrivnak, who has been at the controls for a half dozen or so years. As the flight nears its conclusion, the passengers are told to pull the window shades down and chant the magic words that will allow them to land at the North Pole.

The surprise party for Mrs. Santa was to honor Leslie Lathrop, one of two women founders of the nonprofit, who has been Mrs. Claus 21 of the event's 23 years. As her party began at the donors' celebration, her family emerged from the fireplace in standard Santa style.

It was a youngster named Linkin (CQ) whose day of excitement prompted his comment about the best day of his life to his elf, Gwindor, who in real life is Alaska pilot Scott Hitchings, who is retiring next year but told Paul he wants to continue to participate.

I first wrote of the event in 2010 when I learned of it from my friend, Blythe Thimsen, then editor of a Spokane magazine, who was to be an elf that year, an experience she shared with me then subsequently wrote about and sent me a copy of the article.

And as I explain each year, retelling and updating this story has been my holiday gift to readers of The Harp since then because it's a story of human caring and compassion that not only won't get old but perhaps becomes more needed each year.