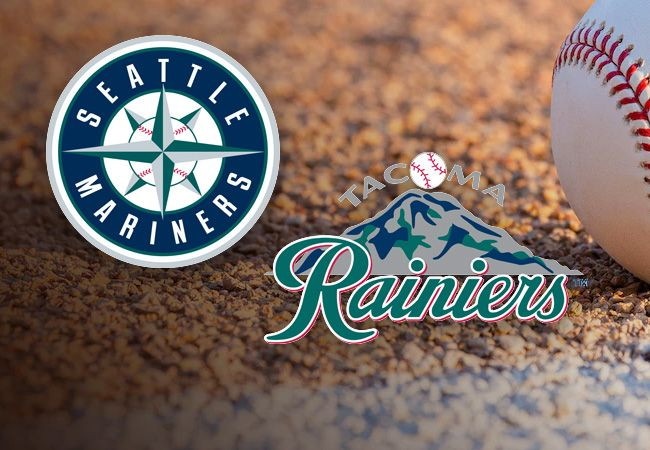 The tale of two boys whose fathers took them to watch their hometown baseball teams and who grew up to be iconically successful in business and thus were able to become owners of those hometown teams could be the most heart-warming story in all of sports.

So before a luncheon audience at the Columbia tower club this week, Stanton and Thomsen fielded questions and shared stories and memories.

I told them, at the outset, that we’d be doing a three-part interview. First, their memories are tied to attending games with their fathers and their youthful affection for their Tacoma and Seattle teams.

Then recollections of their days as early hires of McCaw Cellular Communications, much of whose story is the lore of a company that Craig McCaw, with a key assist from Stanton and Thomsen, built over the course of the 1980s into a major player in the cellular industry.

Then their ability to become owners, in Stanton’s case, the Mariners, of which he eventually became majority owner and CEO, and in Thomsen’s case, the Tacoma Rainiers, which Thomsen described again, as he did for me in an interview a few years ago, as “a dream come true.”

Thomsen’s childhood recollections began when his father took him, as a three-year-old, to see a triple-A team play its first game in more than half a century in Tacoma. That was the first of many.

That ignited a life-long affection of a kid, then a man, for his hometown baseball team.
John Stanton (L) and Mikal Thomsen (R)

And thus, although he grew up to make his name and fortune over two decades as he became a leading figure in the cellular-mobile phone industry, Thomsen's "dream come true" is played out each year as CEO and, with his wife, Lynn, the major investor in the Triple-A Tacoma Rainiers.

And Stanton’s recollections were mostly of being a teenager going with his dad to see the Seattle Pilots in their lone season, 1969, before “a used-car salesman named Bud Selig moved the team to Milwaukee and became the brewers.” He recalled he cried when they moved.

I spent most of the interview tapping their recollections about being early hires of McCaw Cellular, both in their twenties in the early ‘80s.

Stanton, who was McCaw’s first hire and was soon vice chair of the company, and Thomsen, who joined McCaw soon after, became leaders of that emerging industry. And they met their wives there. Theresa Gillespie, chief financial officer at McCaw, and Lynn, who was a paralegal running stock options and handling board relations.

McCaw was really born as a cable business but, with the entrepreneurial instincts of its people, came along at just the right time with the break-up of AT&T ordered by federal court degree in 1982 and completed in 1984 with the creation of seven “baby bells.” 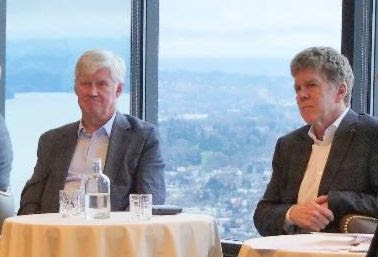 John Stanton (L) and Mikal Thomsen (R)The opportunity for McCaw was in the federal designation of 734 markets, including 428 rural ones, where newly formed wireless carriers like McCaw could apply for and buy spectrum licenses to service those areas.

By the late 1980s, Stanton had focused on the opportunities created by those hundreds of rural licenses, many of which were being returned to the FCCs by those who had applied to provide service, and pitched Craig on going after them.

But Craig made it clear he was too immersed in the metro-area opportunities and urged Stanton to go do that if he wished, so Stanton Communications was born, and a two-decade story of wireless success followed.

First was co-founding Pacific Northwest Cellular with Theresa and Thomsen in 1992, then the founding of Western Wireless, of which Thomsen became president, and the birthing of VoiceStream, which was later sold to Deutche-Telecom. That became T-Mobile, whose name is now on the stadium as the Home of the Mariners.

During our question and answer, it was clear that the audience wanted to focus mostly on their baseball ownership, which brought early indication of the financial role his wife, Terry, has played in Stanton operations.

Stanton recalled when the local Mariner ownership was being put together in 1991; he really wanted to be among those owners. But he noted that Theresa advised “no way.”

“She pointed out we were dipping into our own account every two weeks to make the Western wireless payroll,” then 100 employees.

In 2001 Stanton bought out John McCaw’s small ownership share. In August 2016, he led a group of minority owners to buy out Nintendo’s ownership and became the majority owner and CEO.

Reminded that the name Rainiers had belonged to the Seattle Triple-A team before the Mariners arrived, Thomsen offered with a smile, “yes, but they were named after a beer, and our team is named after a mountain.”

The audience questions clarified the obligation both Stanton and Thomsen feel toward their communities and the role their businesses are expected to play.

When Stanton was asked about how he feels when criticism is directed toward him about a Mariners issue or decision, he said: “The worst thing that could happen to us is if people no longer cared. And criticism of our decisions means people care.”

“We have to care about our community, and that means we have to have a role in addressing community issues and challenges,” he added.

Putting an exclamation mark on that comment was the fact that attendees included Sharon Mooers, senior director of philanthropy for Year Up Puget Sound, which came into existence in Stanton’s office in 2011.

He’s been a key supporter and is chair of the organization whose mission is to "close the Opportunity Divide by ensuring that young adults gain the skills, experiences, and support" leading to careers or into higher education.
Tweet
Tags:
Mike Flynn business corporations people
Before there was basketball at Gonzaga there was f...

More posts from author
Tuesday, 27 December 2022 Before there was basketball at Gonzaga there was football, including a Christmas Day bowl game a century ago
Tuesday, 06 December 2022 Alaska Airlines' 15th Fantasy Flight Saturday from Spokane to Santa 'Displays basic goodness of people'
Monday, 05 December 2022 Three 'women of influence' in Cle Elum could compete with any for their focus on the region, and the planet