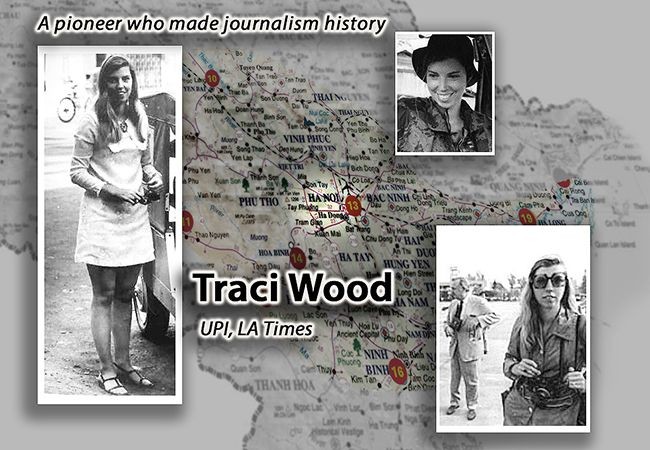 For Tracy Wood, pluck and luck defined the process by which she convinced United Press International to send her to Vietnam in 1972 as one of the wire service's correspondents.
And those characteristics, plus tenacity and skill, helped her become one of the most admired reporters during the final chapter of that war.

I had planned to write about her, as well as two other one-time UPI colleagues, Joe Galloway, and the late Ray Herndon, in reflective columns as we near the 45th anniversary of the Fall of Saigon on April 30, 1975, that brought the Vietnam War to a close.

No such celebration of the 45th anniversary is likely during these virus-focused times.

And instead of writing about Tracy in reflection, I'm writing of Tracy in memory because she died of cancer on March 12 at her home in Fullerton, CA at the age of 76.

I did several columns on Tracy in recent years after we became friends a decade ago as I made periodic business-related trips to Orange County, where she was an editor of Voice of OC, a respected on-line news service, following her years with the LA Times post-UPI.

We had known of each other back then because we were both UPI state capital, political reporters, at the time, she in Sacramento and I in Olympia,

The columns came about after I learned of Tracy being the only reporter on hand for the first North Vietnam prisoner release in 1973 that included John McCain, and of the book in which she partnered with eight other women correspondents to write of their Vietnam experiences.

Wood was in her mid-20s in the Sacramento bureau, when she decided she wanted to go to Vietnam but knew she would first have to get to UPI's headquarters in New where her lobbying would be closer to the decisionmakers.

Her immediate boss on the UPI cables desk in New York didn't think women should cover wars. But Wood had the good fortune to work for UPI, whose top editors Roger Tatarian and  H. L. Stevenson believed in the ability of women to report just as well as men, and dispatched several high-visibility female correspondents to the war zone. Then it was Wood's turn.

The column on her reflections of covering the release of McCain and 102 others from the Hanoi Hilton in March of 1973 came about when I called her after McCain's death in August of 2018.

Tracy said that when she learned of McCain's death, she was "really sad. That guy went through so damned much and the remarkable thing is he seemed to learn from each setback and become better for it."

She recalled that she had been in Vietnam less than a year when word came that McCain, who had been imprisoned under constant torture for five years, and the others would be released two months after the agreement between the U.S. and North Vietnamese to end the war.

Wood made up her mind that she would be in Hanoi for the release of the POWs at a time when every reporter was trying to find a way to get to Hanoi. She first tried to set up a press pool (meaning a group of reporters sharing resources) flying into Hanoi from the Philippines.

But as she remembered during our phone conversation, "Nixon himself vetoed any press pool plan, apparently because he didn't want any of the   prisoners photographed and have the photos sent back to this country."

"So that meant that I had to try a different way," she said.

Thus with that mix of pluck and luck, Wood decided to just ask the North Vietnamese directly for permission to be in Hanoi for the release. And they gave her permission.

Then how to get there, since there was no way for her to merely hop a flight from Saigon. She decided to take commercial flights from Saigon to Bangkok, Thailand, then to Vientiane, Laos, where she caught the Aeroflot flight that was the only commercial connection to Hanoi.

She explained with a laugh that the photo she sent of her arrival in Hanoi dressed in a miniskirt (that I included in that column and here) was because she had dressed for commercial travel rather than for the usual military lift into battle zones in jungle fatigues.

Wood recalled that she "got to stand very close" as the POWs were walked through the iron gates at Ly Nam Prison to the plane for their flight to Clark Air Force Base in the Philippines, but she wasn't able to talk to McCain or any of the others. She noticed that McCain, 36, his hair graying, limped noticeably as he and the other prisoners walked along a wall from the prison to their waiting flight.

"I was afraid he would be furious but he was incredibly nice and told he I was just doing my job," she added. "Remember, he was a war correspondent for United Press in World War II. Really classy guy."

Wood, who spent years as an investigative reporter for the Los Angeles times after leaving UPI in 1975, and at the time of her death was an  editor for the Voice of OC, which bills itself as "Orange County's non-profit, non-partisan newsroom."

Of the book, Tracy recalled for another column that she and Kate Webb, perhaps the most prominent of UPI women correspondents, who died of cancer in 2007, have chapters in "War Torn, Stories of War From the Women Reporters Who Covered Vietnam."

It's a book whose contents are touted as "nine women who made journalism history talk candidly about their profession in deeply personal experiences as young reporters who lived, worked and loved surrounded by war."

Last time Tracy and I connected was by email in September of 2018 when I had to apologize for canceling our planned dinner because my flight to OC had been canceled.

"I was really looking forward to connecting, but life doesn't always turn out the best way," I wrote. I didn't make it to OC again.

That's a close whose sharing left me with a sad sense of loss that seems almost too relevant given circumstances today.