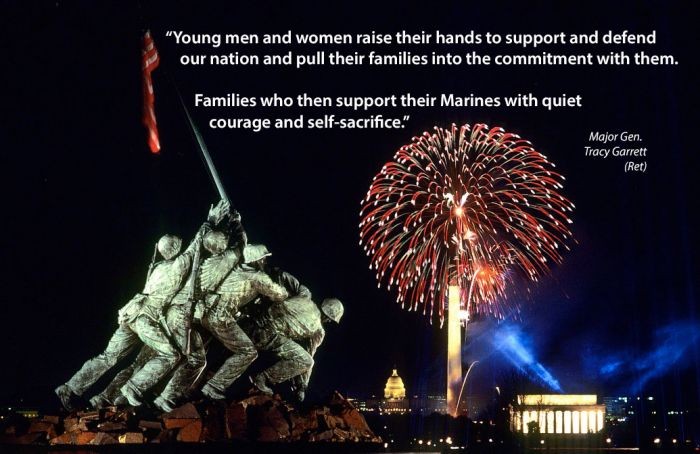 It seems appropriate to celebrate Independence Day 2017 by focusing on a couple of events designed to help remind us that our freedom was secured at the outset and ensured for decades since then not just by the men and women in the military, but by their families, who also served.


One is the 55-year-old Marine Corps Scholarship Fund, whose purpose is to fund college scholarships for children of U.S. Marines. The event has gained growing recognition in the Seattle area since the first local fund-raising dinner three years ago. The other is a new scholarship named to honor widely celebrated Seattle-area Medal of Honor recipient Bruce Crandall and his late wife, Arlene.

Major General
Tracy Garrett (Ret.)
Although the Marine Corps Scholarship Fund was been an annual event nationally since 1962, providing more than 37,000 scholarships and $110 million in scholarship support, the first Northwest event was held in Seattle in 2014, raising $200,000.
Even before that first Seattle event,  the Scholarship Foundation helped scores of Marine children in Washington and the Northwest. But now it has grown dramatically in visibility and support, with the 2016 event raising $900,000.

And that awareness is still growing since, as a Marine whose active reserve duty was in 1962, I first learned about it a few weeks ago when I met Tracy Garrett, the retired Marine major general who serves as campaign chair for the Northwest banquet, which will be held October 25 at the Westin in Seattle.

I decided to do my bit for broader visibility when I learned that two longtime associates, Kirby Cramer, who as CEO guided Hazleton Labs into global leadership in its industry, and Karl Ege, Vietnam veteran, and prominent Seattle attorney and civic leader, were honorees at the 2016 banquet. Cramer was the Globe & Anchor Award recipient with Ege receiving special recognition.

When I called Cramer last week to get a quote for this column, we talked a bit about our past service with the Marine Corps and he appropriately scolded me with "how can we know each other for years and I never knew of your Marine background?"

Then he offered "This MCSF dinner introduces several hundred people to the wonderful work being done to provide higher education to the children of Marines, but the enthusiasm of their word of mouth exposes this event to thousands of their friends."

At this year's Northwest event, the husband and wife team of Fred Radke and Gina Funes will be honored. As bandleader and soloist they have been prominent entertainers in Seattle at first Westin then Four Season hotels and as faculty members, at University of Washington School of Music, they have educated many who became musicians.

"It's worth sharing the impact the scholarships have on the children of Marines," retired Gen. Garrett offered. "Young men and women raise their hands to support and defend our nation and pull their families into the commitment with them. Moms and dads, husbands and wives and certainly the children support their Marines with quiet courage and self-sacrifice."

Garrett, a UW grad, struck me as an excellent reminder that neither the Marines nor any other military branch, whether among the enlisted or officer ranks, are male bastions any longer.

She retired three years ago after 36 years of active and reserve service with career highlights that included combat deployment in Iraq in 2004-2005, being the first woman to serve as Inspector General of the Marine Corps in 2006 and serving as Commander of Marine Forces in Europe and Africa in 2007 and 2008.

The Bruce and Arlene Crandall Social Courage Award, created by their son, Steve, will be presented by Antioch University Seattle and is named for a military hero rather than being presented to a veteran or his or her offspring.

But as Steve Crandall told me: "I always viewed dad's service as not just a sacrifice he made but in which my mother was a partner."
"We often recognize those in the service but this is to recognize her sacrifice, a woman left with three young boys, including a year old infant, while her husband was off on the first of two tours in Vietnam," Crandall added. "She was an example of the truth we now recognize - that you don't have to go off to war to serve your country."

Bruce Crandall was an Army helicopter pilot whose prominence was tied to his heroism at the Battle of Ia Drang. The role in the battle taken by Crandall and his wingman, Ed "Too Tall" Freeman flying their 'copters nearly two dozen times into what amounted to an under-constant-fire Death Zone to drop supplies and evacuate wounded was featured in the book We Were Soldiers Once...and Young, and the movie, We Were Soldiers.

Crandall and Freeman were both awarded the Medal of Honor, the only time that two helicopter pilots were so honored for the same battle.

The younger Crandall, a member of Antioch's Board of Governors and CEO of ProMotion Holdings in Seattle. said $55,000 has been raised with the goal of awarding the first $5,000 scholarship this fall. He said the plan is to award scholarships quarterly to an undergraduate and one to a student pursuing a masters degree.

The award, for which applications are now being reviewed, is meant to empower Antioch Seattle students "with a desire and vision for engaging our community in addressing critical social issues," Crandall said, noting that "those who are veterans already can attend courses free at Antioch."


Going back to the Marine Corps conversation with Cramer, I shared that my post-retirement business travels on a somewhat regular basis to Orange County and San Diego have provided me considerable reminder time of Boot Camp in San Diego and advanced training at Camp Pendleton those 55 years ago.

Whenever my Alaska flight lands in San Diego, I focus on and recall the huts of boot camp visible not far beyond the airport. And on the occasions when I drive from Orange County to San Diego, the path crosses Camp Pendleton where sometimes training exercises are going on not far from the beach that is the west side of the mostly arid hills of the base.
Anyone who has been through Marine Boot Camp isn't likely to forget the not just physical by also psychological training that prepared Marines for whatever was to come.
Tweet
Tags:
Mike Flynn Government Karl Ege Kirby Cramer Marine Corps Schoalrsip Fund Retored Gen. Tracy Garrett Bruce Crandall Independence Day
Effort to fund endowed chair for Dr Paul Lange, pr...
Ruckelshaus comments recall 2011 insights on issue...