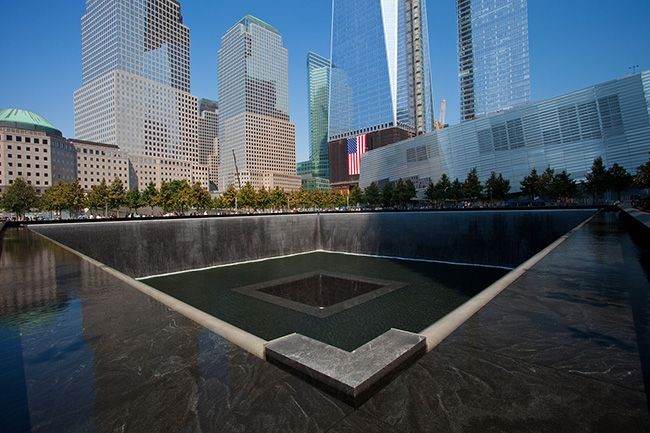 (EDITOR'S NOTE: Perhaps nothing can help remind this divided nation what unity looks like more than to recall the manner in which the citizens of this country, supported by the citizens of virtually every nation, came together united in grief over the tragedy of that 2001 September day etched forever in our minds as 9/11.
Toward the goal of providing that reminder, I share again, as I first did in a Harp on the 10th anniversary of that day and again on the 15th anniversary, and each year since then the piece written by a former, now late, United Press International colleague named Al Webb.

From his post in UPI's London bureau, Webb recapped days later the grief that poured out for us from across the globe. It has become my annual reminder of that display of shared pain out of a sense that we deserve to be reminded. Or rather it is required that we be reminded.)
------------

By Al Webb
LONDON (UPI) -- A small girl with a Cockney accent shyly waved a tiny American flag, and a queen brushed away a tear. In a Scottish town that has known its own tragedy, a lone church bell tolled. On a German river, foghorns sounded a low moan.

Across countries and continents, waves of sympathy for a nation in anguish rolled on. A young woman in a Kenyan park wept over the sad headlines in newspapers spread on the ground. A one-time terrorist donated blood for the victims. Hundreds stood in line in cities from Dublin to Moscow to sign books of condolences.

And over the outpouring of grief and mourning for the lives lost in the boiling flames and rubble of the World Trade Center towers and a wing of the Pentagon, time and again came the strains of "The Star-Spangled Banner," sometimes in places where it had never been sung before.

In a gesture reminiscent of John F. Kennedy's "Ich bin ein Berliner," symbolizing his solidarity with another troubled people a half century ago, the Paris newspaper Le Monde perhaps summed it up best: "We are all Americans."

In London, where the little girl with the funny accent and her American flag pressed her damp face against the gates, the band performing the traditional Changing of the Guard at Buckingham Palace suddenly did something it had never done before -- it struck up "The Star-Spangled Banner."

For 45 minutes, the Mall in front of the palace became a little piece of America for hundreds of its citizens who were there because there were no planes to take them home. And the band of the Coldstream Guards played on.

As tear-stained faces lifted and sang along, as Americans and British and other nationals waved Old Glory, the marches rolled -- "The Liberty Bell" after the national anthem, followed by "The Washington Post March" and "Semper Fidelis" and finally, heart-rendingly, "When Johnny Comes Marching Home."

What the Coldstream Guards had triggered was the greatest mass demonstration of grief in Britain since Princess Diana was killed in a car crash four years ago. And as with Diana's death, a carpet of flowers, children's toys, poems, letters, all illuminated by tiny candles, built up this time at the fortress-like U.S. Embassy in London.

Amid the hundreds of bouquets, a single American flag was wrapped around a tree. One woman pressed her tear-dampened lips to its fringe in a soft kiss.

The sweeping tide of mourning reached its crescendo at 11 o'clock Friday morning when Britain, France, Germany, and scores of other countries in Europe, Africa, and Asia went silent for three minutes, in honor of the innocent dead in America.

In Paris, the elevator at the Eiffel Tower stopped halfway to the top. Buses, trams, and cars halted in their tracks across the continent.

In Spain, more than 650 city and town halls became gathering centers for tens of thousands who bent their heads in silent prayer -- and then, at the end of the three minutes, they lifted their eyes and applauded in that people's traditional tribute to the victims of terrorism.

On the River Elbe leading into Hamburg, ships flew their flags at half-mast. The minutes of silence crept by -- and at the end were broken by the sound of a thousand foghorns rolling across the water into the city's very heart.

In Lockerbie, Scotland, there was no applause, no singing, no bands, only the ringing of a single church bell, and the flutter of flags at half-mast. This is a town with singular links to America, forged in a terrorist attack in the skies 13 years ago.

In all, according to an estimate by The Daily Telegraph newspaper in London, some 800 million people across Europe joined in the three minutes of silence.

At Berlin's Brandenburg Gate, once part of a dividing line between freedom and tyranny, a crowd of some 200,000 -- among them Germans whose relatives had died in terrorist attacks -- gathered beneath a black banner bearing the words, "We Mourn With You."

In Paris, crowds jammed the Place de la Concorde, itself a symbol of reconciliation, while church bells rang for five minutes before the silence.

In the government's Elysee Palace, "The Star-Spangled Banner" rang out, while over the French airwaves, radio stations played John Lennon's "Imagine."

The bankers of Switzerland are not noted for their sentimentality, so they dealt in their own currency. At the end of the three minutes of silence, they announced they were donating more than $500,000 to the families of the victims of the atrocities in America.

Lloyd's of London, the insurance market-based in the British capital and one of several insurers of the World Trade Center, rang its Lutine bell and observed a minute of silence in memory of the dead in America -- some of them in the several broker offices Lloyd's has -- had -- in the WTC.

In Belfast, the bullets and bombs of Northern Ireland's own form of terrorism, known as sectarian violence, went silent as tens of thousands from both sides of the divide -- Roman Catholic and Protestant - gathered in front of a makeshift stage at City Hall, to stand in silent tribute.

It is a city that knows the heartache of terrorism. "We have suffered for 33 years," said Betty McLearon. "People here have to be admired for the way they can cope with it. It will take the people in New York a long time to get over this."

In Moscow, the Russians observed a minute's silence as they laid wreaths and floral tributes outside the U.S. Embassy, once a symbol of the Cold War. Thousands of Muscovites lined up patiently to sign books of condolences.

In turbulent Israel, a nurse gently inserted a needle into the right arm of Yasser Arafat, himself a one-time terrorist who is now head of the Palestinian Authority. In a demonstration of support, he was donating blood to help the American injured.

Back in London, the minutes of silence were followed by a service of remembrance in the capital's majestic St. Paul's Cathedral, led by Queen Elizabeth II herself. In the audience of 2,400 inside, Americans hoisted the Stars and Stripes for the rest of the world to see via television.

Outside the cathedral, the tens of thousands who could not get in waved their own tiny flags and listened over the loudspeakers that carried the words and music for blocks around.  The cathedral's huge organ rumbled into life, to open the service, appropriately, with the American national anthem.

Then something happened that has never happened before, certainly not in public and doubtless not even in private. Softly, the queen began to sing "The Star-Spangled Banner."

Now, the British monarch does not "sing" national anthems. When they are played, she never even opens her mouth. Until now.

But Queen Elizabeth sang it all, this song whose words were written 187 years ago during Britain's last war with her lost American colonies, through the final words, "O'er the land of the free, and the home of the brave." With the last note, the queen gently brushed away a tear.

(Al Webb died in January 2015 at the age of 79 after a UPI career that ranged from the civil rights struggles to Vietnam's battlefields to the Houston Space Center. But he might well be best remembered for this piece of moving reportage whose rereading stirs a compelling question about whether the global regard for us that the outpouring of affection evidenced remains our national treasure. Or has it become a squandered legacy.)