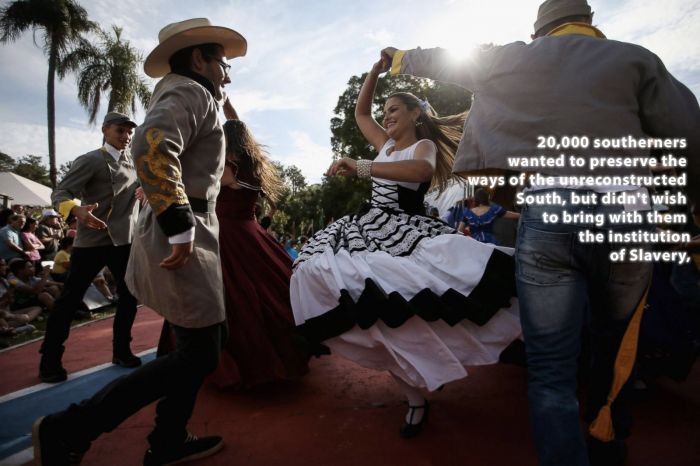 Removals of Robert E. Lee's statue in New Orleans and a Confederate monument in Louisville were designed to pluck from prominent display the symbols of that dark chapter of American history represented by the War Between the States over slavery. Meanwhile, a hemisphere away, descendants of Confederates who emigrated to Brazil after the Civil War were celebrating the 150th anniversary of the arrival of their ancestors in what would be their new country.

Perhaps proving that history is too complex to be rewritten or expunged, the celebratory gathering of some 2,600 confederate descendants at their annual picnic at Cemeterio do Campo, the cemetery where hundreds of "Confederados" are buried, included the continuing honoring of their flag, the Stars and Bars. 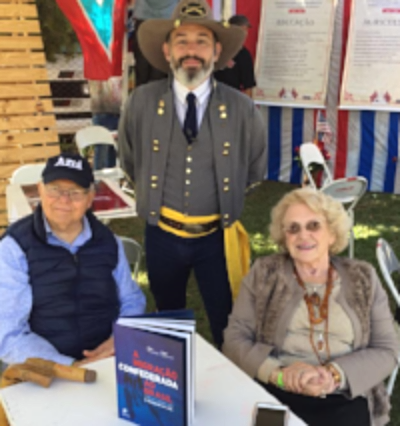 The story of the Confederates, hailing mostly from Georgia, Alabama and Texas but with every state represented and amounting to the largest emigration in U.S. history, doesn't get attention in books on American history.

And the fact that the more than 20,000 southerners wanted to preserve the ways of the unreconstructed South, but didn't wish to bring with them the institution of Slavery, may merit some interest from historians unless the effort that some see as seeking to sanitize history is successful.

However, My friend Gary Neeleman, who with his wife, Rose, was at the cemetery for the 150th event, has published the definitive story of that slice of American history and was there to take orders for his book, recently published in Portuguese but with discussions under way with a U.S. publisher for an English version.

The title's English translation, "The Migration of the Confederates to Brazil: Stars and Bars Under the Southern Cross," is the account of how Brazilian Emperor Don Pedeo II successfully sought to attract the Southerners who didn't wish to be restored to U.S. citizenry.

The Brazilian government set up informational agencies across the Bible Belt and offered to pay relocation costs for all Americans willing to make the move. The first arrivers were met at the dock by the Emperor, who welcomed them to their new home.

The emperor's goal was to plant the seeds of Brazilian prosperity, including creating a cotton industry, by importing the self-exiling Southerners, who settled southwest of Sao Paulo in two communities a couple of miles apart, Americana and Santa Bárbara d'Oeste.

Neeleman, a longtime colleague at UPI and a friend of 45 years, who has been the subject of several Harps over the years, first visited the cemetery in 1963 as UPI's Brazil manager. The idea for a book began to take shape on that first visit.

Neeleman, now a robust 82, has made more than a dozen trips to the cemetery since then, often with Rose, as they gathered information from descendants and collected photos from them.

Because of his close ties to Brazil, and his official role as Brazilian Consul in Salt Lake City, Neeleman is sometimes asked to take guests to the annual gathering at the cemetery.

Thus a few years ago, he escorted former president Jimmy Carter and his wife, Roselyn, and presidential press secretary Jody Powell and told me, "It touched your heart to see their tears as they looked over the Georgia graves and 'Dixie' was played."

"That first time I visited the cemetery, driving out in my '49 Hudson Hornet, I was shocked at the extent to which these people were still entrenched with their history," he recalled.

"The stars and bars of the Confederate battle flag is visible everywhere but it's important to know that wasn't the flag of the Confederacy. Rather they look upon the flag that was carried into battle during the civil war as the symbol of their states' rights," he added.

Among the interesting bits of information in Neeleman's book is that not only did those descendants reject the opportunity to have slaves in Brazil, where slavery remained prominent at the time, but at least one former slave came along.

"A black woman named Sylvia, a free woman, insisted she wanted to remain with the family for which she had been a slave and so she accompanied them to Brazil," Neeleman said.

Neeleman details the contributions the Confederate descendants made to their new nation, including helping make Brazil a leading cotton exporter, as the emperor had hoped.

"MacKenzie College was founded by the confederates in Sao Paulo and, with five campuses around the country, it is one of the top colleges in Latin America," he said.

"And a second-generation Confederate founded the big hospital in Sao Paulo, Samaritano Hospital, where three of our kids were born," he added. One of those was David, who founded Jet Blue and is now CEO of Azul, one of the largest airlines in Brazil.

"People in the United States consider that Confederate battle flag the symbol of slavery but for these people, it's a symbol of their ancestors' way of life," Neeleman said, noting that "not only are the flags prominently displayed on the graves, but some insist their caskets be wrapped in the flag."

The highlight of this 150th anniversary picnic, Neeleman told me, was when the American and Brazilian flags were raised, along with the Stars and Bars, over the gathering of some 2,600 attendees, and the "Star Spangled Banner" was played along with "Dixie." A parade included the great great grandchildren of the original southerners carrying the flags of the 13 states of the confederacy.

Perhaps to touch lightly on the effort to expunge things Confederate from U.S. awareness, Neeleman observed that when the band at the cemetery struck up Dixie, "it was reminiscent of when Abraham Lincoln faced the crowds after the victory of the North over the South, and people thought he was going to give a victory speech. Instead he turned to the band and ask them to play Dixie."

The visit to the cemetery was part of a challenging week for the Neelemans, with three stops in Brazil to promote the book on the Confederates and a trip back home to UCLA to be recognized by the Brazilian studies department for his third book, Rubber Soldiers, just published this month in English about Brazil's key role in World War II (see Flynn's Harp: Rubber Soldiers).

"Even some of the people from Brazil studying there said they hadn't been aware of the role their nation played, in sending thousands of their countrymen into the jungles to restore the rubber harvest to producet the rubber without which the allies might not have been able to wage war against the Axis powers," Neeleman told me.