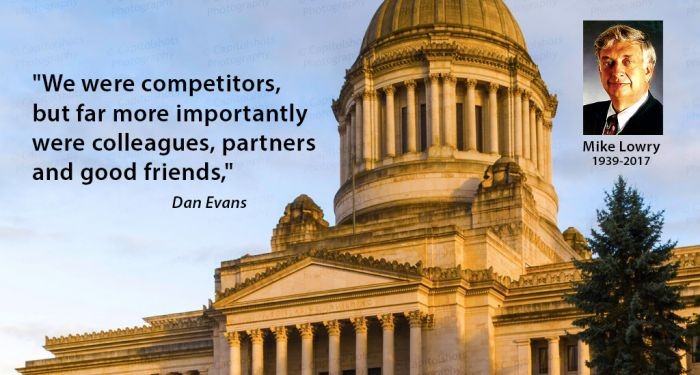 It would be laughable, in this era of unbridgeable political divides, to envision an elected official who nurtured his image as "liberal Democrat" while priding himself on being "the congressman from Boeing." But that was Mike Lowry, the former governor who died early Monday after suffering a stroke.
Because of our 50-year friendship, beginning when he headed the staff of the State Senate Ways & Means Committee and I was the Capital reporter for UPI, this Harp will be more of a personal reflection on Lowry than a catalogue of who he was and what he did.

He was this state's epitome of the progressive politician for 40 years. He believed in the environment and cared deeply about the needs of farm workers, causes he was still involved with at the time of his death at the age of 78.

Lowry was an urban politician proud of his rural roots, growing up in the Palouse community of St. John, and his education at Washington State University.

It was in his desire to get things done for job-creating big business that he was unusual for a Democrat. He brought his political power to work on behalf of Boeing and other large companies because he felt it was the state's role to help companies that provided high-paying jobs.

Thus while being viewed by small business as the enemy, he was generally held in high regard by big business, including Boeing, which quietly supported him in his successful bid for governor in 1992.

It was soon after the election that Lowry called me to meet for breakfast to talk about possible candidates to head the state department of trade and economic development . I thought it would be cool to meet with the governor-elect at the WAC, maybe Rainier Club or even the Four Seasons.

Then I learned that his favorite breakfast spot was the Denny's on I-405 north of Renton. Nothing too fancy for Lowry and thus it became the place we met regularly over the years.

Lowry wanted to know what I thought of Mike Fitzgerald as a potential director of the agency. Because Fitzgerald was a friend and a fellow Montanan who got his economic development start working personally, right out of college, for the governor, I said "he'd be great."

Fitzgerald, now president and CEO of the Denver South Economic Development Partnership, worked directly for or with nine governors during his years in economic development and told me in a telephone conversation this week: "I have never worked for anyone who loved their state more than he loved Washington state and its citizens."

"He understood and could articulate the role of the triple bottom line of successfully balancing the economy, the social agenda and environmental considerations," Fitzgerald said, noting that Lowry "was personally involved in Washington landing two of the biggest tech-industry coups in the country at that time."

He was referring to Lowry ensuring the state took the steps necessary, including things like new freeway interchanges and face to face meetings, to land Taiwan Semiconductor in Clark County and an Intel plant in southern Pierce County.

The antipathy of small business, particularly small-business organizations, was cemented from the outset of Lowry's single term as the state's chief executive (he didn't seek a second term partly because of the publicity that surrounded a sexual harassment action by a former press aide, which was settled).

That antipathy was particularly true after he guided legislative enactment of a statewide system of health insurance with premiums based on ability to pay, a law that put a lot of cost pressure on small businesses.

It was the anger of small business toward Lowry over the healthcare law, in addition to is his guiding the 1993 Legislature to double the business & occupation tax for service businesses, that led to my most amusing memory of him. I had sought his partnership with The Puget Sound Business Journal to put on a Governor's Conference on Small Business.

He agreed but as small business antagonism toward Lowry intensified, I grew concerned about the kind of animosity he might face when he appeared at the conference. So I met with him the afternoon before to express my concern and urge him, when he opened the conference the following morning, to just thank the business people for being on hand and wait until the end of the day to make positive comments about things he was doing for business.

"Good advice," he said as we sat in his office going over the agenda. So I was stunned when he opened the conference doing exactly what I had advised him against.

As a result he was pummeled throughout the day by negative comments about him, directly or by innuendo, from the array of speakers from the various sessions.

I was worried when he left quickly without attending the closing-session cocktail party. And more so the next day when I received an anxious call from the person in his office assigned to work with me on the conference.

"I am very worried because he called his entire staff together this morning, expressed his anger and said 'I am going to find out who was responsible for the embarrassment I suffered,'" the staff member told me.

I contacted Lowry and asked if we could meet in his Seattle office to review the conference.

As we sat down facing each other, I said: "Governor, I get the impression you are unhappy about the conference. If there was a problem, there are only two people who could be responsible. You are looking at one, and you see the other one in the mirror."

He flipped his arm up as one of those ear-to-ear smiles spread across his face and he said: "I don't have time to worry about yesterday's irritations, so don't sweat it."

Don Brunell, retired president of Association of Washington Business who often crossed swords with Lowry and other Democratic governors on business issues, told me not holding a grudge was a Lowry trademark.

Brunell offered the comment: "Lowry never personalized anything. He could blow his stack at you one day and be genuinely smiling the next."

Lowry served 10 years as the state's 7th district congressman and twice ran for the U.S. Senate, losing to Dan Evans in a special election in 1983, and to Slade Gorton in 1988. before returning to the political wars to run for governor in 1992. He won, defeating state Attorney General Ken Eikenberry to win his lone term.

After his '88 loss to Gorton, he returned to Washington state along with Dan Evans, who had decided not to seek re-election, and the two joined together to initiate the Washington Wildlife and Recreation Coalition (WWRC).

"Since we came from very different political backgrounds we were soon dubbed the 'Odd Couple,' Evans recalled in an email to me. "I think we both enjoyed the title and both have seen a huge result from that small beginning."

"We were competitors, but far more importantly were colleagues, partners and good friends," Evans added.

Brunell praised Lowry as an elected official with integrity. "While most of them promised not to raise taxes and sometimes wound up doing so, Lowry said he would only raise taxes as a last resort." He did raise the B&O tax dramatically in 1993 but cut back on half the increase two years later.

Said Evans: There was never any question what Mike believed and he worked tirelessly on issues, always with peace, people and progress in mind. We lost a first rate political leader, a passionate believer in people, and I lost a good friend."

Mike Lowry, who created now-debated tech tax breaks, offers another side to debate

The tax breaks for high-tech companies that are now seen by some as depriving the state of millions of dollars at a time of dire budgetary challenges were a proud accomplishment of his administration, says former Gov. Mike Lowry, noting they were created to lure new business to Washington.

"We were coming out of what was, at that time, the state's worst recession and we needed to attract industries that would produce good-paying jobs," Lowry recalled of the proposal he came up with and pressed through the 1994 Legislature.

The focus of the current criticism, and Lowry's comments during a recent interview, are what the critics refer to as "tax loopholes" and he calls "incentives" that have permitted high-tech companies to avoid paying state sales tax on new facilities, including equipment.

"We were absolutely correct to come up with policies to lure companies to the state that would create high-paying jobs that were basically the jobs of the future," Lowry said.

"We kept encountering companies that said they had looked at and then rejected this state as a place for new facilities," Lowry recalled. "The incentives allowed us to move into one of the most competitive positions among states."

One of the state's key competitors in the hunt for new high-teach companies was neighboring Oregon, which had and has no sales tax, and that put this state at a dramatic disadvantage.

Soon after enactment of the sales-tax exemption legislation, Washington State won a major victory when Taiwan Semiconductor announced it would be locating in Clark County rather than in Oregon. "The largest one-time capital investment ever in this state," Lowry said. Other wins were a Sharp Electronics facility and an Intel plant in southern Pierce County

A $132 million tax break for Microsoft, due primarily to its construction of data centers in Quincy in Grant Country, has raised some eyebrows among those viewing the state's list of the dollar impact of such tax preferences.

While he is convinced about the importance to the state of having created the sales-tax exemptions, he is equally convinced that they need to be reviewed periodically to ensure they are doing what was intended.

"Those tax breaks shouldn't just continue automatically," Lowry said. "Each piece of tax-incentive legislation needs to be looked at individually from time to time for possible sunset (termination). Each must be justified on the basis of expansion of jobs."

In fact, in the intervening period since Lowry's program in 1994, sales tax exemptions, and exemptions from the state's business & occupation tax have proliferated and been extended to logical industries like aerospace manufacturing, biotech and medical-device manufacturers.

Other also logical exemptions are for manufacturing in rural counties and manufacturers of timber and wood products, though some of the exemptions may cause more head-scratching, like fruit and vegetable processors, dairy and seafood processors and cold-storage warehouses.

The State Department of Revenue's most recent figures on the tax exemptions, for 2009, indicate 278,000 jobs were credited to the tax incentives, which cost the state $236 million, $109 million of which was claimed by high-tech firms while $80 million in reduced state and local tax receipts was for rural manufacturers.

Mike Fitzgerald, who was a key member of Lowry's team as director of Community, Trade and Economic Development and who has held held similar positions in three other states and may  be one of the nation's most experienced economic-development experts, reserves special praise for Lowry. Fitzgerald credits Lowry with really understanding the way the game had to be played to bring jobs to the state.

"He would bring his entire cabinet together and tell us that we were not to violate any environmental considerations, but otherwise we each had a role to play in working together to go after these companies," Fitzgerald recalled in a visit about a year ago. "Under Lowry, we recruited or were in competition for more big business than maybe under any other governor."