Deeds of Brien Wygle, like many in retirement, tucked away until his death brought recall 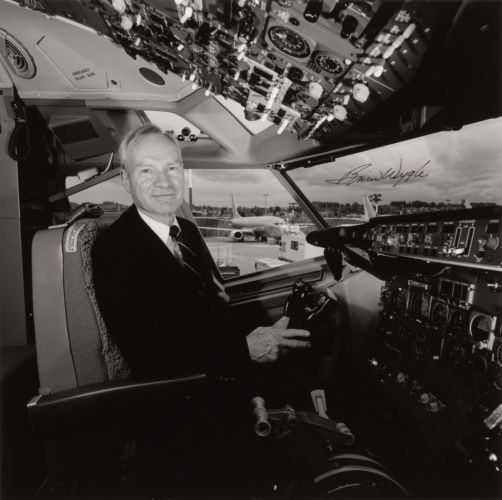 Brien Wygle was comfortable with risky environments, whether in the air as a test pilot for Boeing and later in life flying aerobatic biplanes or on the water as a hydroplane racer. But after hydroplane legend Bill Muncey ran over the right half of his hull at 200-plus miles an hour to get past him in a race on Lake Washington, Wygle decided the skies were safer.

Wygle’s death on September 15 at the age of 96 at The Bellettini retirement community in Bellevue, where he had moved in 2017, reminded me of the Muncey story he told me one day when we were visiting.

His career as a hydroplane driver had been for a brief two years in 1957 to 1958, although his races on the circuit, driving the Thriftway Too and Hawaii Kai III, included the major ones like the Gold Cup, Diamond Cup, and Sierra Cup.
But it was flying that Wygle loved, from the time the Calgary native was a pilot in the Royal Canadian Air Force during World War II in Europe, India, and Burma.

He joined Boeing in 1951 in Wichita as a flight test pilot and stayed 39 years, retiring as vice president of Flight Operations in 1990.

So what prompts me to do my column as an obit on Wygle this week? The fact that his story, like those of many people of advanced age, living quietly in retirement communities or remaining cared for in their homes, stay tucked away in their minds or scrapbooks or photo albums until death allows the world to revisit their special moments.

Those like William H, Gates Sr., who died a day earlier, appropriately have their stories and contributions spread across their communities’ awareness right up to the day they die.

So back to Wygle. His love of flying continued into his 80s, retiring when his hearing loss required it at age 84.

And regarding the Muncey incident that made Wygle decide to stick to the challenges of the skies, he recalled he was leading Muncey and as they came out of the turn, he “heard the roar of Muncey’s boat overtaking me and suddenly there he was roaring over the side of my boat.”

“The damn guy didn’t care if he killed me or not as long as he got past me,” Wygle recalled. “I figured the next time might not be one I survived, so I packed it in.”

And regarding the Muncey incident that made Wygle decide to stick to the challenges of the skies, he recalled he was leading Muncey and as they came out of the turn, he “heard the roar of Muncey’s boat overtaking me and suddenly there he was roaring over the side of my boat.”

“The damn guy didn’t care if he killed me or not as long as he got past me,” Wygle recalled. “I figured the next time might not be one I survived, so I packed it in.”

Though less visible than those of the most prominent, his contributions were nonetheless meaningful and important to remember.

More visibly, he was a founder of the Museum of Flight and on its board for several years.

Achievements of deceased astronaut focus of program for at-risk kids

Nine years on from Michael P. Anderson's death on the ill-fated space shuttle Columbia, the fund-raising effort to ensure continuation of the annual program at Seattle's Museum of Flight aimed at inspiring at-risk children of color to dream big dreams is nearing its final stage.

In fact, the effort launched for a hometown hero by Spokane business leaders following the Feb. 1, 2003, shuttle disaster, along with the major assist from African-American pilots of Alaska Airlines and a financial commitment from the airline itself represents fulfillment of a big dream in its own right.

As the Museum of Flight prepares to host the third annual Michael P. Anderson Memorial Aerospace Program on February 4, final selection is in progress for the group of 10-to-14 year olds who will receive support from a special fund to attend the day-long session.

The goal of the program has been to create an enduring memory of Anderson and to make his achievements an object of aspiration and inspiration for young people, particularly the African-American students who would seek to emulate him. It's intended to help inspire an interest in science, technology, engineering and math (STEM) education and careers.

Avista Corp. CEO Scott Morris, motivated in part by the fact Anderson's father was an Avista employee, assigned the firm's director of community development, Anne Marie Axworthy, and communications manager Jessie Wuerst lead roles in the project, with a goal of  raising funds for a statue of Anderson in his hometown. That was soon after the shuttle disaster. But with completion of the larger-than-life bronze statue in Spokane in 2005, the vision expanded.

That meant doing something on the west side of the state and that led to a focus on a second statue at Seattle's Museum of Flight, which was dedicated in June of 2009, as well as a program to bring African-American children an awareness of Anderson and his accomplishments. That led to the creation of the Michael Anderson Memorial Aerospace Scholarship for Children of Color, which is administered by the Museum of Flight.

The campaign to raise the final $50,000 to ensure that the Museum of Flight program and the scholarships continue will also get a boost next month when the person credited with being the key figure in making the Seattle portion of the program a reality retires from the Air Force and returns to Seattle.

Maj. Gen. Harold L. "Mitch" Mitchell, Deputy Inspector General of the Air Force in the Office of the Secretary of the Air Force, retires this month after two years on active duty and will resume his role as an Alaska Airlines pilot, which is what he was doing when he was first approached about involvement.

"The goal has been to do more than merely put up a statue," Mitchell explained in an e-mail exchange this week. "It's important to leverage Anderson's legacy to help students have a chance to do similar things."

In an effort to put together a group to focus on the goal, Mitchell turned to other African-American pilots at Alaska, then realized "we needed some funding to make this happen so we thought it was an idea worthy of sharing with the company."

He says they didn't expect Alaska to be as supportive as it was, but the airline agreed to put up $100,000 as matching funds over four years.

"To be honest, we've struggled on our side of the match, but they have been outstanding," Mitchell said.

Anderson was 43 when he and the other six crew members of the Colujmbia crew perished as the shuttle broke apart on re-entry.

But in an interview from space earlier in the 16-day  mission, Anderson expressed a thought that became the quote on the plaque on each statue: "This is what I wanted to do since I was a little kid.  If you apply yourself, work hard to be persistent, and don't give up, you can achieve anything you want to achieve."

It's that commitment that supporters of the Museum of Flight program hope to bring to a growing number of children of color from all parts of Washington State.