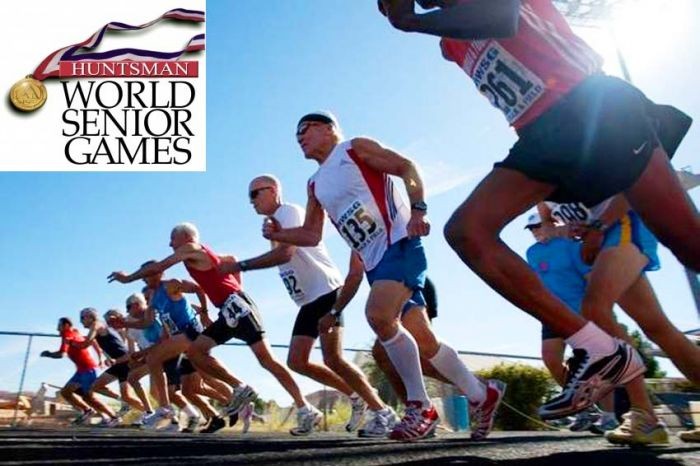 The phrase "senior support group" takes on a whole different meaning when the senior is a 79-year-old seeking to remain athletically competitive and the support group is a trio of unusual healthcare providers and a nationally prominent track and field coach seeking to contribute to the process.

Members of this particular senior support group came to the fore in the past three weeks to see if collectively they could salvage my hope, after a leg injury while working out, to get to this year's Huntsman World Senior Games in St. George, UT, where I have competed in my age group in the 100-meter sprint half a dozen times in the past decade.

The support team is composed of Bryan Hoddle, one of the nation's most recognized and honored track and field coaches; Dr. Robert Greczanik, an acupuncturist, and practitioner with athletes both amateur and proof what he calls "energetic technologies;" high-intensity trainer Ann-Marie Anderson, and skilled Reiki practitioner Trini Evans. Interestingly, they are also teamed in that they are each other's friends and clients, as I am their client or, in Hoddle's case, friend.

Hoddle and Anderson have both been subjects of Harps (Flynn's Harp: Bryan Hoddle and Flynn's Harp: Ann-Marie Anderson) while columns on Greczanik and Evans are in planning, not because they are friends but because what they are doing to bring new definitions to healthcare merits attention.

The challenge they are now helping to address with me is that during a recent workout on a Bellevue track, as I wound up my workout with a series of full-speed 100's, near the 80-meter mark of the second 100 meters, it suddenly felt as if an alligator had bitten into the base of my right hamstring. I instantly knew I had torn it, or at least pulled it.

The details that follow will be interesting to some readers, amusing to others who think they know all about sports medicine.

I called Hoddle to ask if I could do any sort of exercise in the following three days before I could get in to see "Dr. Bob," given the injured hamstring and pain accompanying it.
"Don't do anything until you see Dr. Bob, and make sure to ask him if you locked your big toe," he added.

It was a weekend and I knew I wouldn't be able to see my acupuncture doc, "Dr. Bob," at his Energetic Sports Lab in Bellevue until Tuesday since Monday is the day for Seahawks to see him repair game day injuries.

Robert Greczanik, known to most as "Dr. Bob," has a doctorate in the practice of acupuncture as well in Oriental Medicine and for 20 years has been serving athletes (and others) to "achieve peak performance," avoid injuries and recover rapidly when injury does occur.

Acupuncture is a technique in which practitioners stimulate specific points on the body by inserting thin needles through the skin. It is one of the practices long used in traditional Chinese medicine.

Since he has worked with organizations and athletes from the Seattle Seahawks and Sounders, Buffalo Bills, Los Angeles Clippers, Portland Trailblazers and numerous other pro and college organizations and individuals, I was pleased and grateful that he has had time for an old runner. Being friends helped.

When I asked Bob about Hoddle's "frozen big toe" comment, he replied that I hadn't frozen it but he made the point that "most people are unaware of the fact that there are fibers in the big toe that help determine the health of the hamstring as well as other parts of the body. Yours is okay."

I remarked to Dr. Bob that I realized there was no way I was going to be able to run a competitive 100-meter race in three weeks but that I'd like to begin getting my hurting hamstring back to health.

"Hey, 'white lightning' (his nickname for me that he knows will bring laughter), don't worry about it" he replied. "You'll be running fine by then.'

So he placed the needles in my hamstring and areas in the other leg and after 25 minutes on the table, he removed them and the hamstring felt like new. But I realized I needed to avoid full-speed effort until the race day.

"So what can I do on the track now," I asked and Dr. Bob replied, "ask Coach Hoddle."

Coach Hoddle counseled me to do 40 percent-speed work out on the track, followed by 60 to 70 percent speed three days later. "I tell my guys returning from an injury to remember the 72-hour rule."

Hoddle is one of the nation's most recognized and honored track and field coaches whose attention to developing young athletes and counseling coaches came to include aiding disabled athletes and now a national focus on wounded veterans who have lost limbs and need to learn to run again.

And he's full of sayings, as in when I worried that I wished I could get one more workout in before heading for St. George, he said "Don't worry about it. The hay is in the barn." When I asked what that meant he replied: "You're set. Don't need any more preparation." Hd followed that with "People don't realize that less s frequently better."

When I returned to Dr. Bob the following week, he placed his needles in several places but none in the injured hamstring and when I questioned that, he replied "Hamstring is all well now. Go for it."

Meanwhile, sessions with my high-intensity trainer to keep muscle strength as close to normal as possible and Reike to enhance the healing, as well as deal with a sore back muscle, added key elements to the return to health.

Trini Evans, my Reiki Master/Teacher practitioner in the form of healthcare that is based on the idea that human hands can redirect "life force energy" to heal stress and assist in the body's natural healing processes, became a key part of the healthcare team seeking to restore my ability to compete.

In addition to the Reiki healing process, she regularly provided the counsel "relax. Focus on your ability. You'll do fine." Maybe that was mental Reike.

Interestingly, Reiki is now viewed by many as an effective, accepted alternative practice in mainstream America, where at least 1.2 million adults have tried the energy healing therapy that 60 hospitals have adopted as part of patient services and education that is reportedly offered at 800 hospitals.

And the high-intensity training sessions with Ann-Marie Anderson, one a week, as I have been doing with her in her Ideal Exercise Gym for more than three years, became important for her focus on ensuring that I retained the upper-body strength key for sprinting.

Anderson is a nationally recognized leader of a small but growing group of practitioners of an exercise technique called high-intensity resistance training, which Greczanik, also one of her clients, describes as "the new paradigm of training."

So after my workout on the track at 90 percent of full speed over the weekend, I told each member of the team this week: "Thanks, guys. I didn't really expect to be ready for the starting line in St. George after the hamstring pain hit, but I now know I will. So we'll see when the gun sounds mid-morning on Oct. 16 how many seconds before I reach the finish line, as well as how many guys got there ahead of me."

Oops! Each of my healthcare team has admonished or scolded me on several occasions in the past three weeks to quit focusing on the idea that some will be ahead of me. "Sorry, guys!"

The reality is I've never taken first in this race at the Games, but I've taken 2nd, 3rd, 4th, and 6th. So some year there may be no one ahead of me at the finish line.

So of the Huntsman World Senior Games themselves. The late Jon Huntsman Sr.'s vision of creating an event that would attract hordes of seniors to Southern Utah annually to engage in competition with each other if he named it the World Senior Games has become, over three decades, likely the most successful event of its kind in ...well...the world.

As many as 10,000 seniors show up at the remote corner of the West over the two weeks to compete in the Games, which include events ranging from track and field and tennis to golf, archery, bowling, cycling, lawn bowling, and various others.
So back to this year's Games. All those on my team have joined the ranks of friends important to me and I to them. So perhaps the best incentive next week in St. George will be that I don't want to let them down.
Continue reading
2156 Hits
0 Comments
Tags:
Mike Flynn people business corporations Huntsman world senior games energetic technologies high-intensity training senior citizens Reiki 100 meter dash acupuncture Oriental Medicine Seattle Seahawks Seattle Sounders Buffalo Bills Los Angeles Clippers Portland Trailblazers
Tweet
2156 Hits
0 Comments